This reporter was again afforded the privilege of attending The 2015 Indy Mile Event as an official media representative of the Castrol-Triumph-Bonneville Performance AMA Pro Flat Track team along with VETMotorsports, by the event promoters, Family Events out of Indianapolis, Indiana. Special personal thanks go to Leah Burdette, Marketing Coordinator for Family Events and Peter Cline, Executive Director of VETMotorsports for arranging this opportunity for me.

I arrived at the Indiana State Fairgrounds in Indianapolis, IN in the early afternoon after driving down from my home near Chicago IL. 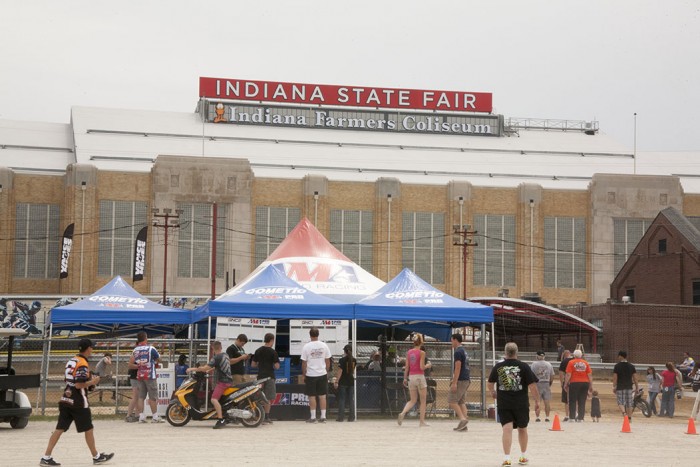 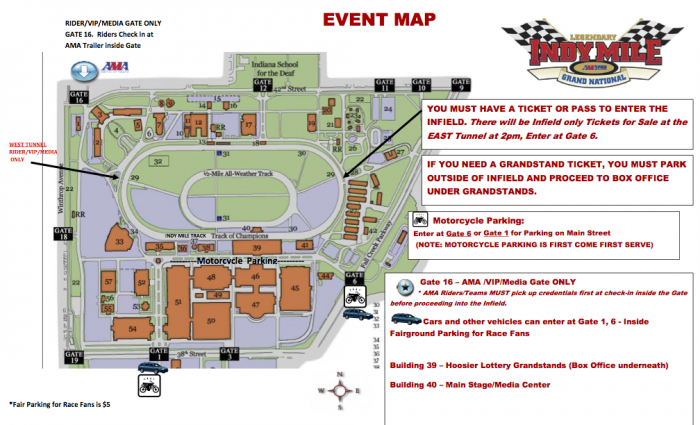 The condition of the track at the Indy Mile looked pretty good. The stands started filling up later in the afternoon as practice laps and heat races began. Opening ceremonies began at 6:30 pm and as always people were watching online at fanschoice.tv. 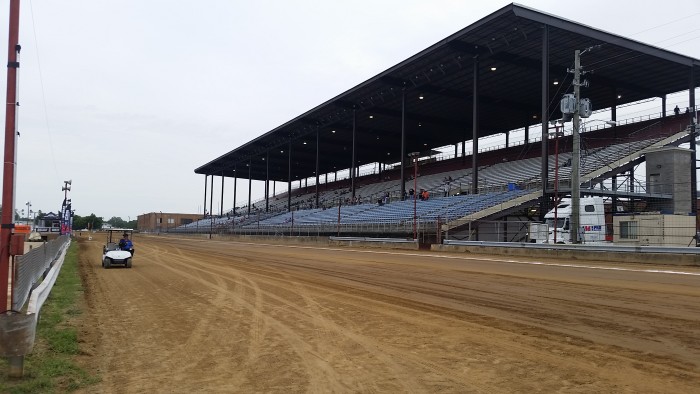 Early afternoon view of the grandstands and main straightaway.

The team pit area was nearly completely setup due to the help of the VETMotorsports crew members for the day: Peter Cline, Rick and Jonathan. 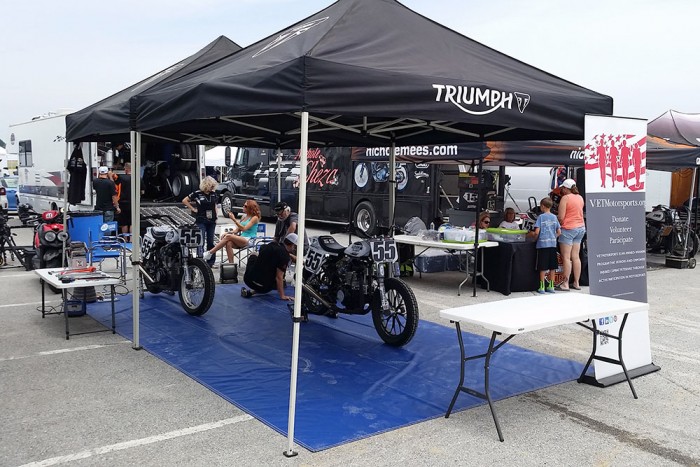 A BIG shout out to Nancy & Terry Otton of Ramspur Winery for their support of Combat Wounded Veterans! Awesome people! 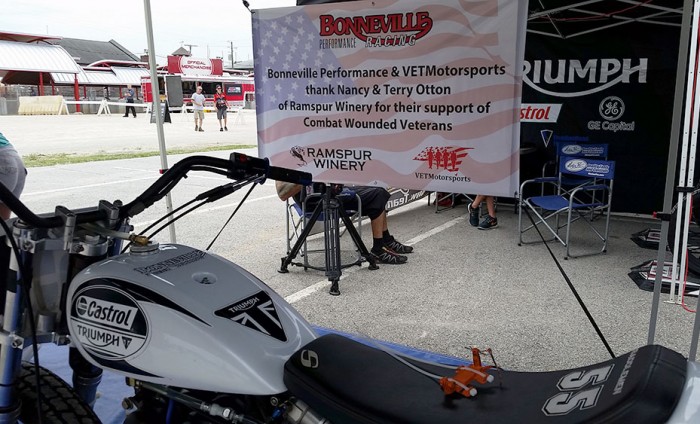 One of the banners in the Bonneville Performance pit area

Shortly after I arrived and started shooting and posting, we were ahead of schedule. The bikes had passed tech inspection and our pit area and sponsor signage was up. We were anxious to get the races rolling!

However, there was a little drama going on here! It turned out that as Steve Gately was pulling the team truck into the Indiana State Fairgrounds earlier that morning, the serpentine belt on the engine broke! This caused loss of all power-driven features such as power brakes, air conditioning, power steering, etc. 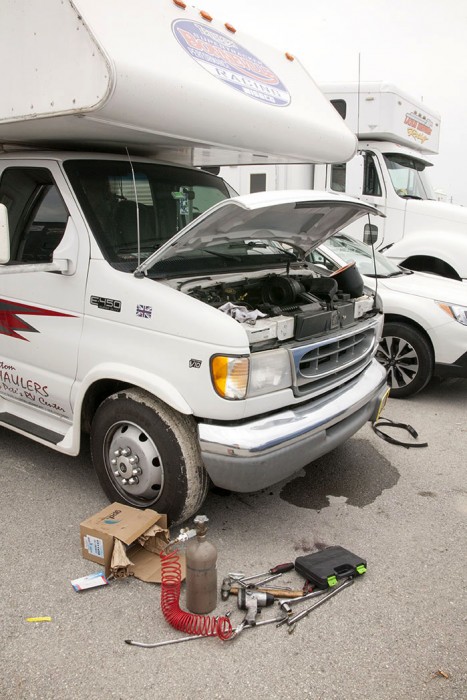 Not a good sight to see on race day!

Wasting no time, our rider Jake Shoemaker #55 decided to fix this problem while the rest of the team setup the pit area and prepared the bikes for racing! 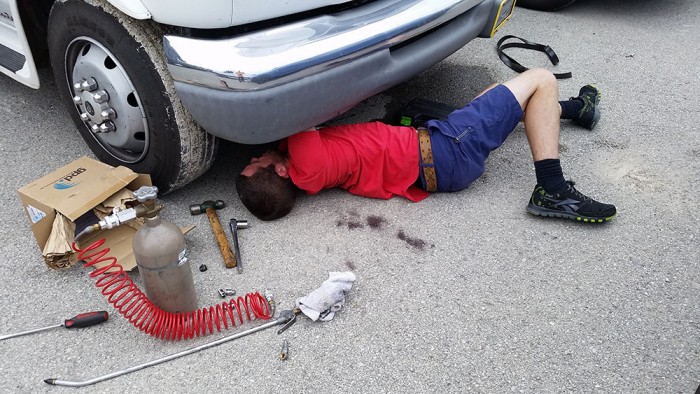 Within an hour or so, Jake had the problem fixed… new AC compressor and serpentine belt! 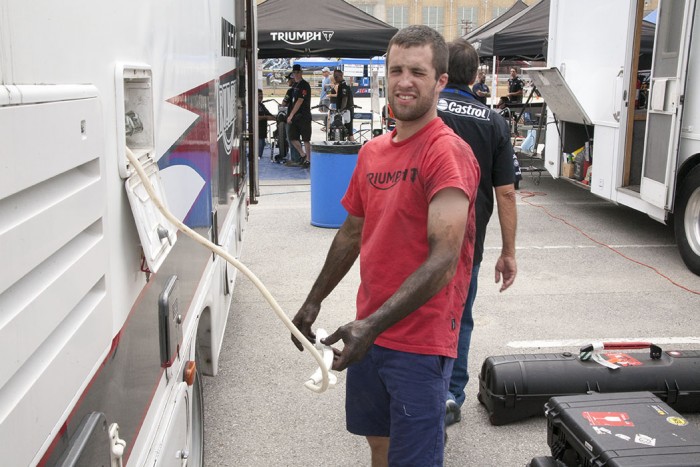 Our ace mechanic Jake Shoemaker #55 getting cleaned up after replacing the failed AC compressor in the Bonneville Performance truck!

This top-down photo of the end of the AC condenser pretty much sums it up! Good thing that bearing didn’t fail while Steve was on the road driving to the race track! 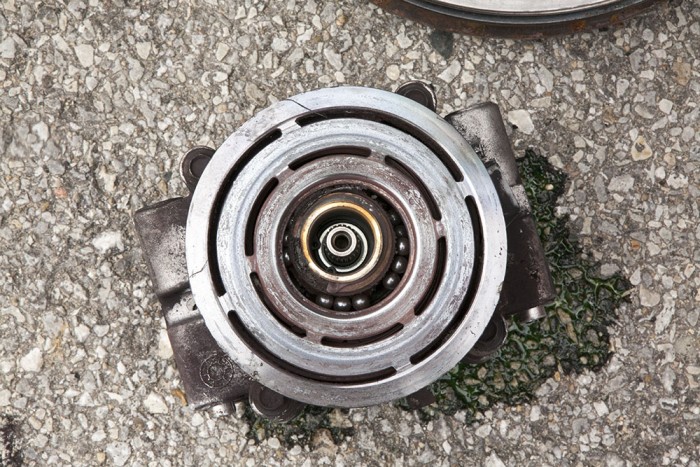 Failed A/C Compressor bearing that caused the serpentine belt to break and then everything else not to work!

One of the first things that happens at an AMA Pro Flat Track race to get everything rolling is the mandatory Riders Meeting. There was some drama and controversy during this meeting about the “2 minute rule” that determines what a team can and can’t do when a bike fails to start or stops running at the beginning of the race or on restarts. 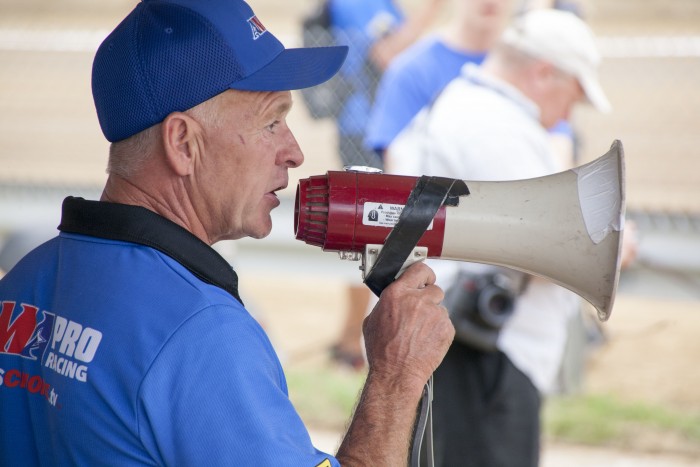 After the Riders Meeting, and when you see Steve Gately gassin’ up the bikes with racing fuel, it must be timed practice lap time! 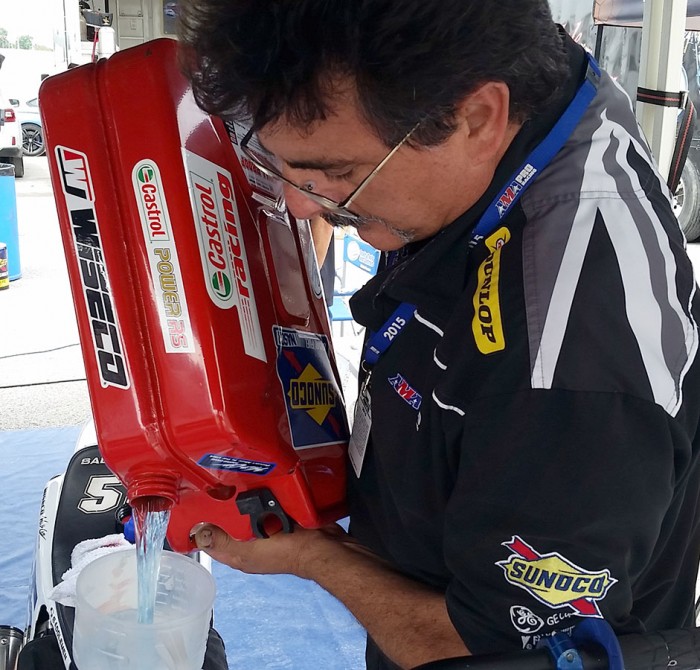 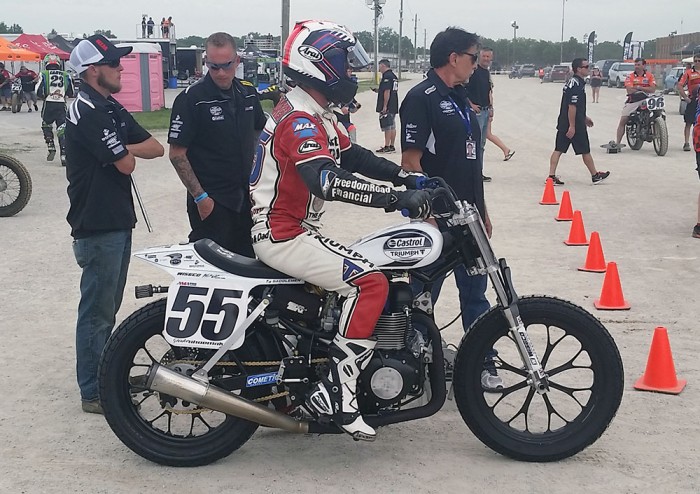 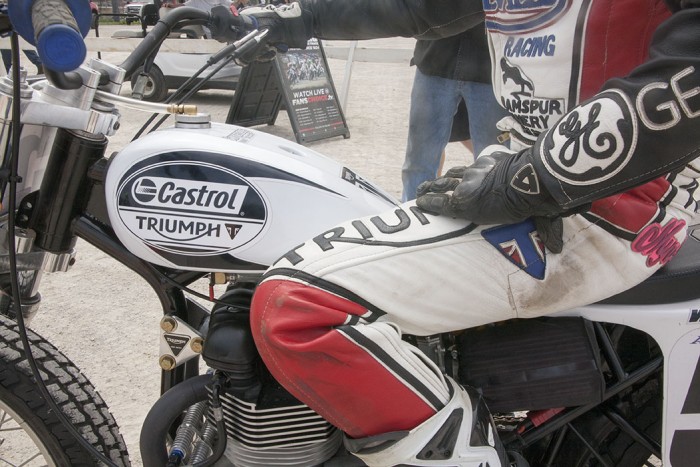 Thank you Triumph Motorcycles – we couldn’t do this without you! 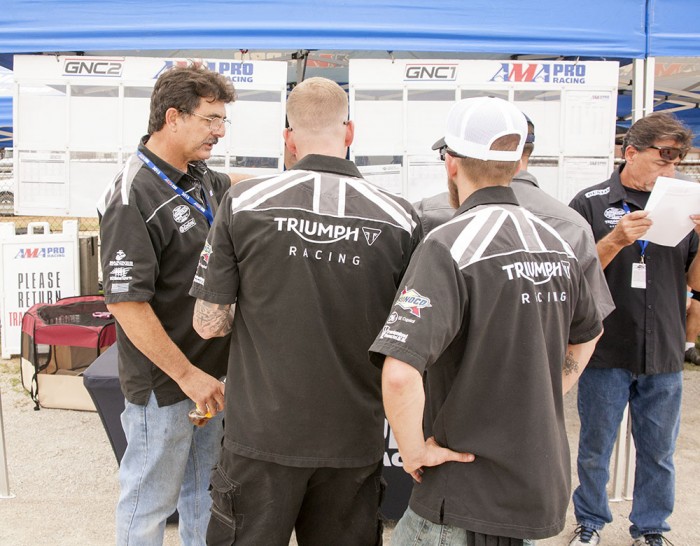 Steve Gately is explaining how to check out lap times at the AMA Pro Racing tent.

While we waited for the track to be watered before our second practice lap session we prepared a second bike to see if we could improve our lap times with it. 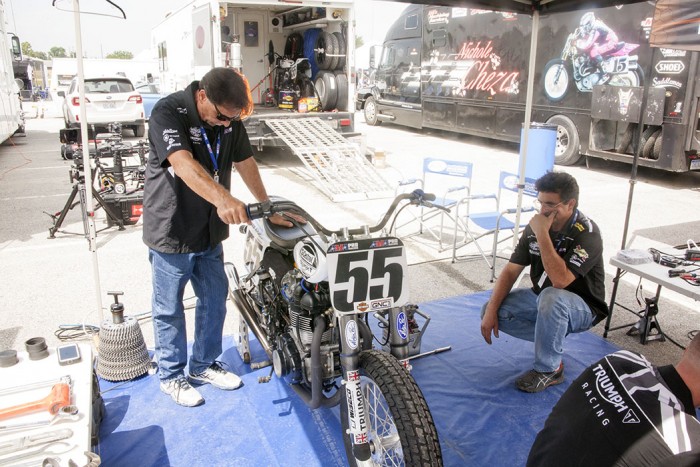 Bill and Steve Gately thinking about the best strategy in what bike to use for the second round of practice laps.

Based on the timed practice laps, the top riders are placed into 1 of 3 heat races. The top 4 finishers of these heats move directly to the GNC1 Main Event race in the evening.

Jake was in 7th position after 2 practice runs with a best one mile lap at 38.924 seconds

Jake Shoemaker #55 placed 4th in his heat race which allowed him and the team to transfer directly to the GNC1 Main Event! 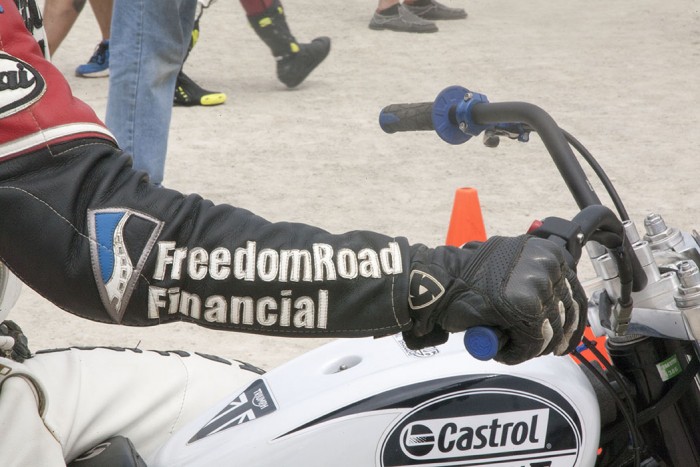 Just one of our many great sponsors who make this all possible… thank you FreedomRoad Financial!

There is usually a break in activity after the heat races and fans are allowed into the paddock area for autographs and conversations with the teams they support. 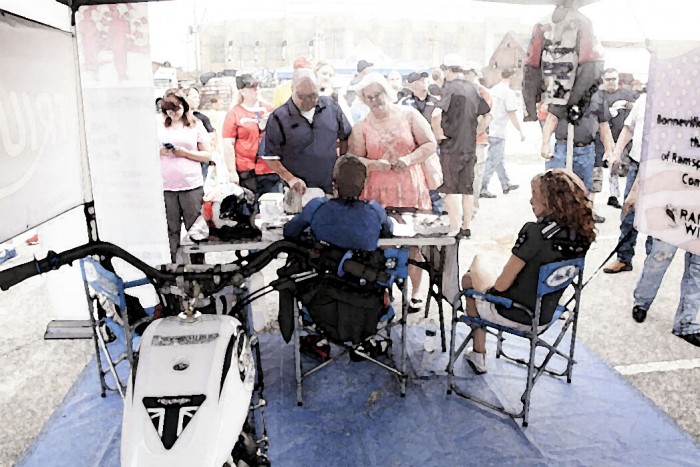 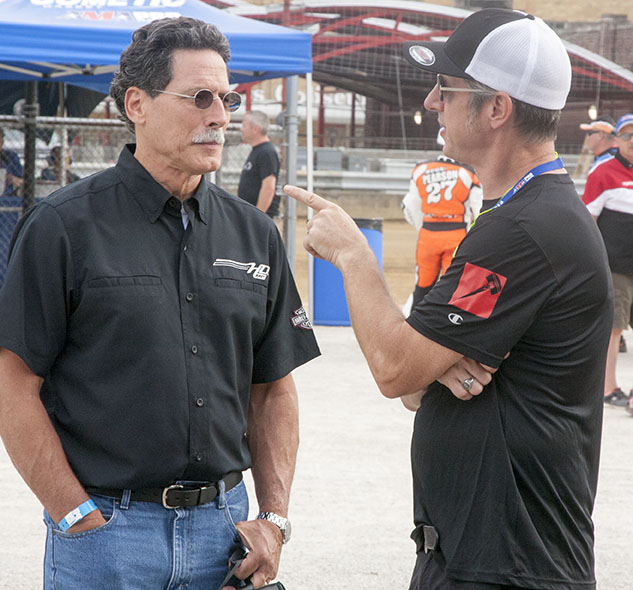 Thank you Peter Cline for all you do through VETMotorsports! 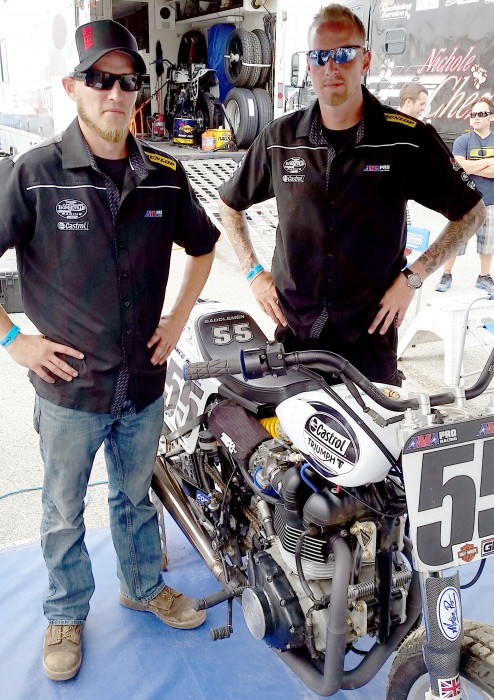 We are honored to have 2 veterans helping us today in our pit crew through the outreach program of VETMotorsports. Thanks Jonathan and Rick for your help today! 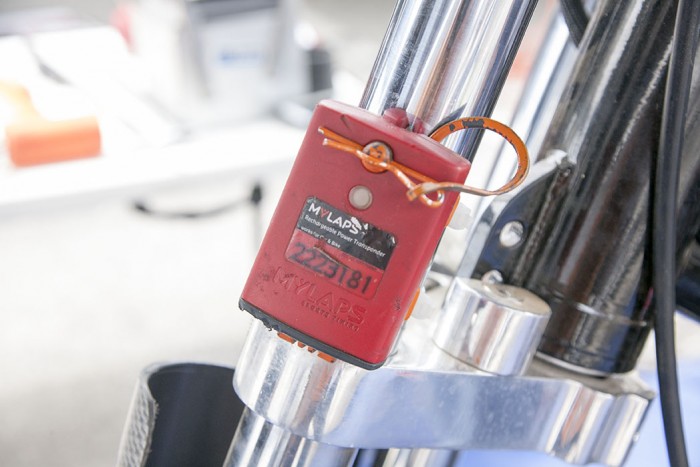 These are the official AMA timing transponders that get mounted to the left front fork of each bike that is racing. These enable the accurate timing for the event! 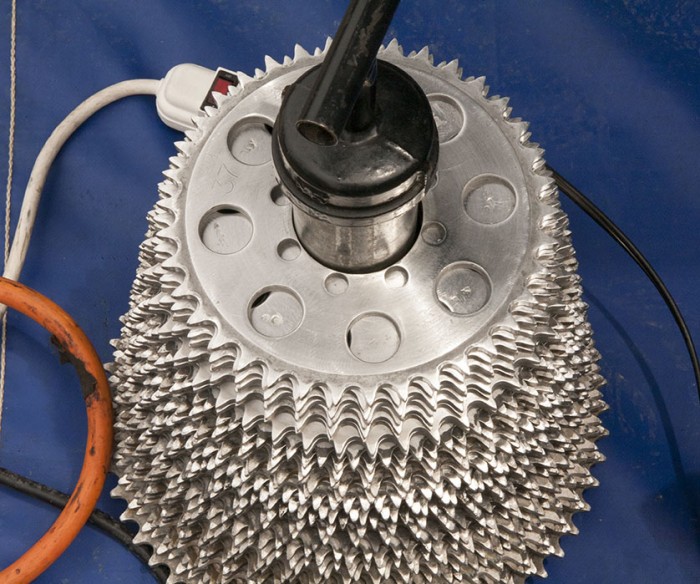 Somebody spent some time cleaning sprockets since the DuQuoin Mile! 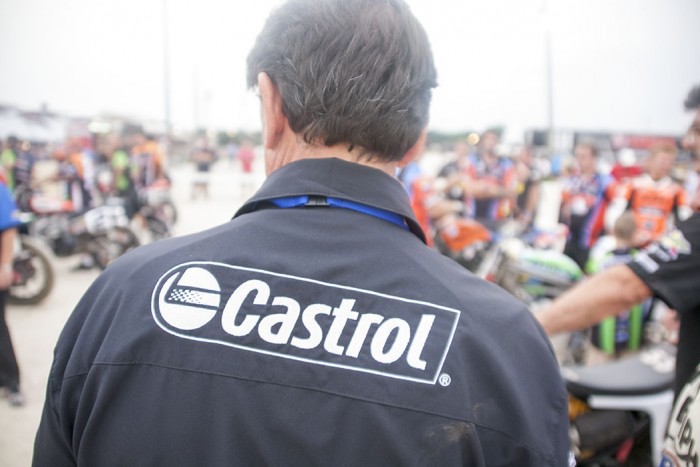 Thank you Castrol for your support of the Bonneville Performance AMA Pro Flat Track team!

At 6:30 an abbreviated opening ceremonies commenced due to a storm front threatening the races. After all the final 18 teams and riders were introduced, the GNC1 Main Event race was held.

The Bonneville Performance team being introduced for the GNC1 Main Event! 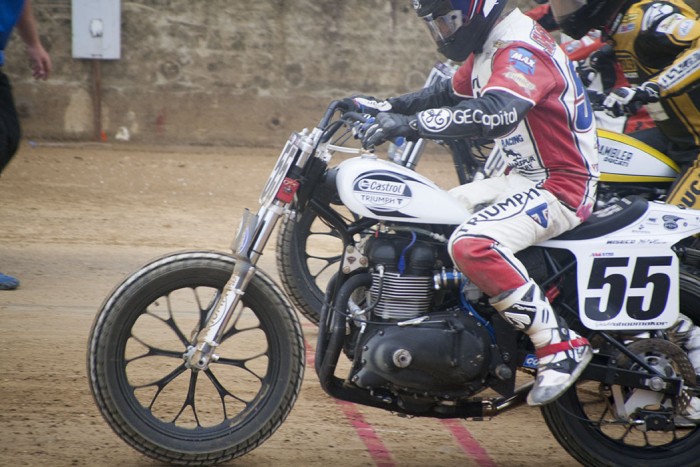 Jaske gets a good start in the GNC1 Main Event.

The GNC1 Main Event race was stopped under a red flag because of a rider down. He turned out to be OK. During red flag stops riders and teams have a limited number of things they can do… one of them is to clean helmets and visors! However, they cannot do anything mechanical to the bikes. 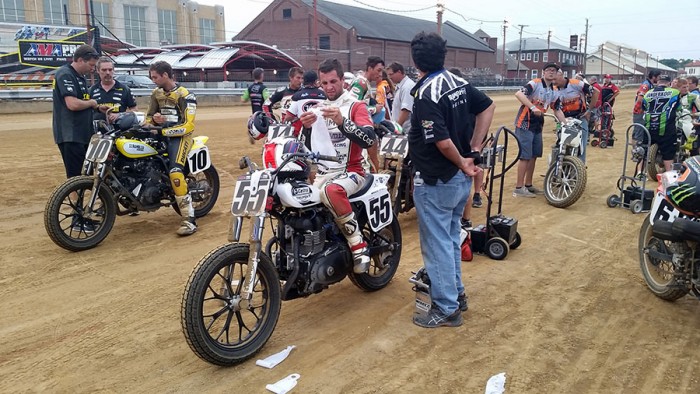 We’re stopped again with a red flag… Getting the visor cleaned up!

15 laps into the GNC1 we were stopped under another red flag. At this point Jake was in 13th position and hoped to move up after the restart. On the final restart we noticed the engine was burning oil – not a good sign. Two full red stops is very hard on an air cooled engine that has been pushed to its limits! 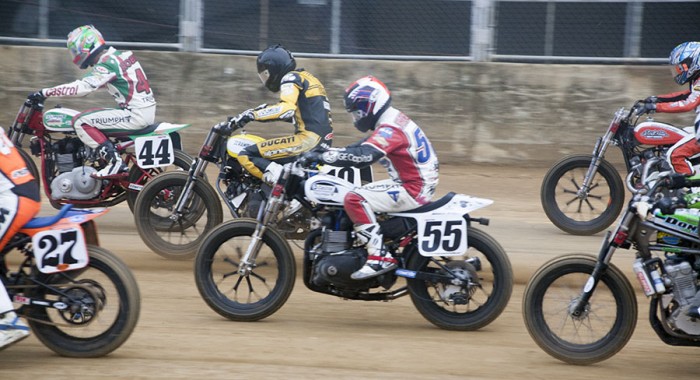 Off and racing again!

At this point, knowing the engine was in imminent danger of failure, we just hoped to be able to finish the race! 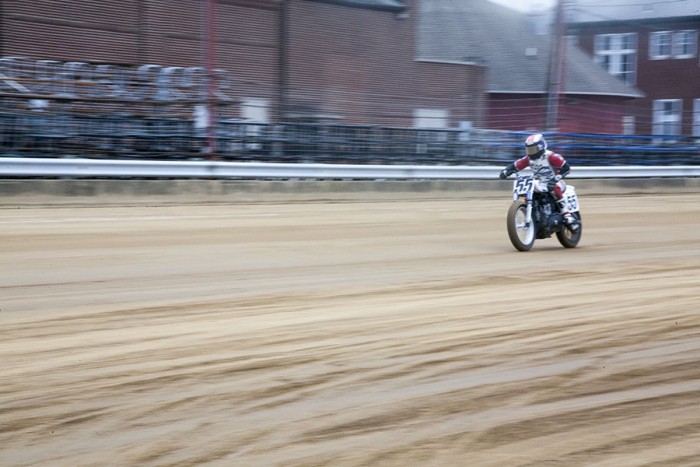 We finished 10th even with a blown engine… way to go Jake!

Given our circumstances, we did very well to finish in 10th. The bike will need a new engine before it races again on August 4th at the Black Hills Half-Mile in Rapids City, SD. 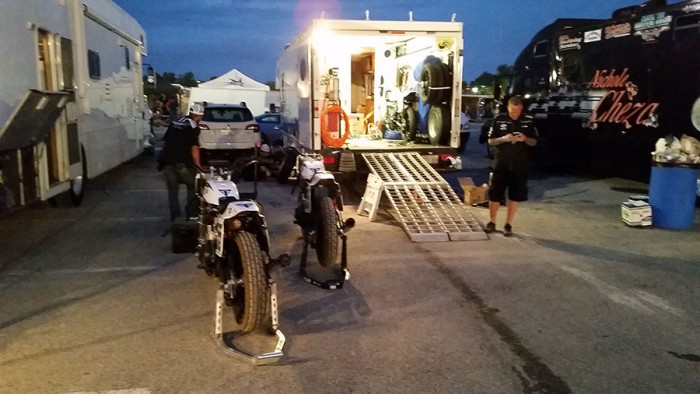 Packing it in… We avoided the rain!