This blogger/reporter travelled from Chicago to the DuQuoin State Fairgrounds on Saturday, July 4th (Independence Day) for the running of the DuQuoin Mile. This was the first time this AMA Pro Flat Track sanctioned event had been held in nearly a decade thanks to Family Events, the Indianapolis based event promoter. I want to personally thank Peter Cline of VETMotorsports and Leah Burdette of Family Events for making it possible for me to cover the event as a photographer/blogger member of the media.

The DuQuoin State Fairground is a beautiful place and the track, facilities and grandstands are architecturally interesting. DuQuoin hosts a state fair here on a yearly basis complete with farming and livestock competitions, carnival rides, pie baking contests, cotton candy, country music and pretty much everything you would expect of a large rural American county or state fair. Seems like a perfect place to have some good ol’ down home flat dirt track racing! 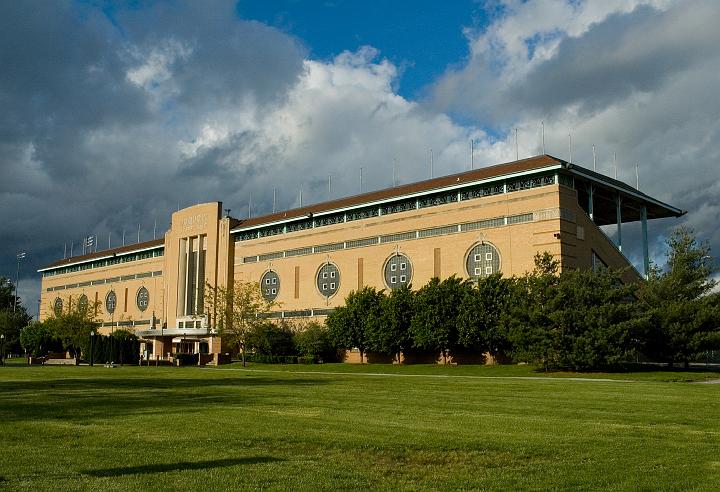 In the Riders Meeting I learned from Race Director, Steve Moorehead, that this one mile dirt track is unique in the AMA Pro Flat Track circuit in that there are 4 straightaways. The track shape is more like a rounded rectangle than it is an oval. Unlike the Springfield, Sacramento, Indy or Colonial Downs Mega Mile, there is a short straight section between turns 1 and 2 and turns 3 and 4. This unique difference requires riders to take a different racing line than they might otherwise take on the more oval shaped tracks. 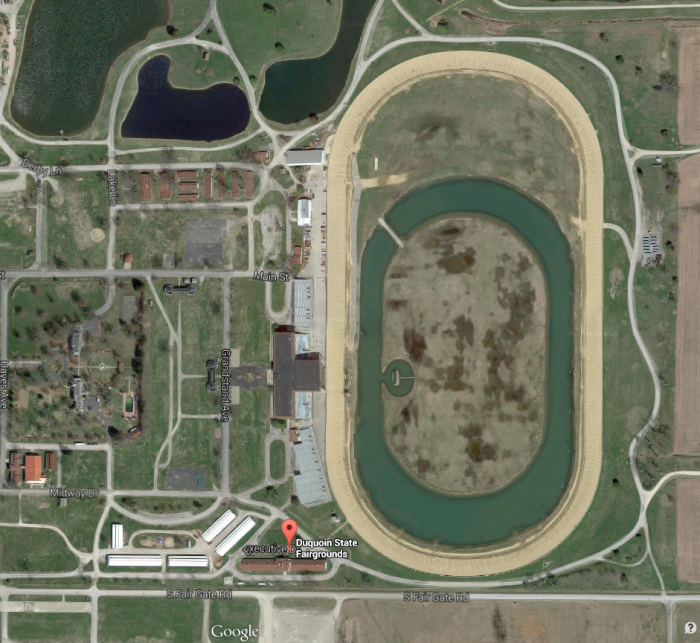 I arrived a little before 12 noon and made my way to the reserved parking area, then walked to the paddock area with my equipment to connect with the Castrol-Triumph-Bonneville Performance AMA Pro Flat Track team owned by Bill Gately, featuring GNC rider #55, Jake Shoemaker. 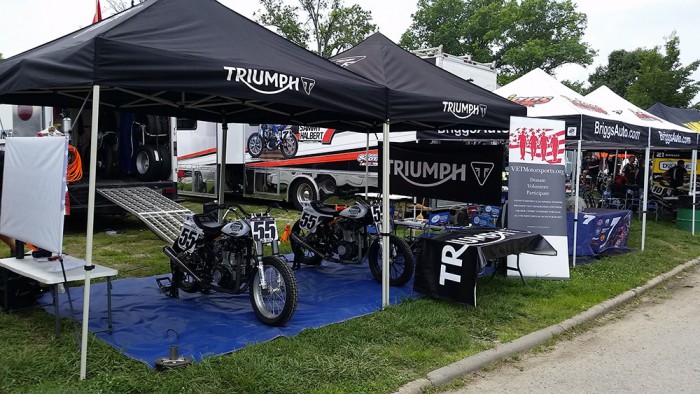 The team had already arrived and setup the pit area with the attractive black Triumph branded awnings and banners, blue floor mats and the Supertracker race bikes on display having already passed tech inspection. Preparations on the bikes were being made under the direction of Crew Chief, Steve Gately. 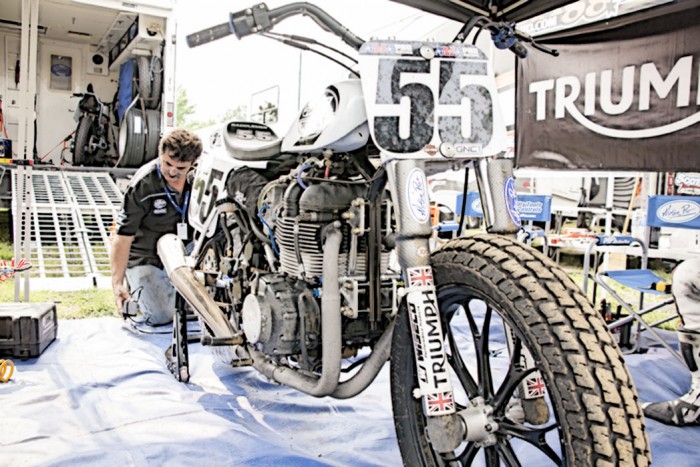 Joining the pit crew for the day were two members of VETMotorsports, Eric and Eddie. Team rider #55, Jake Shoemaker also assisted with suspension and other fine-tuning adjustments. 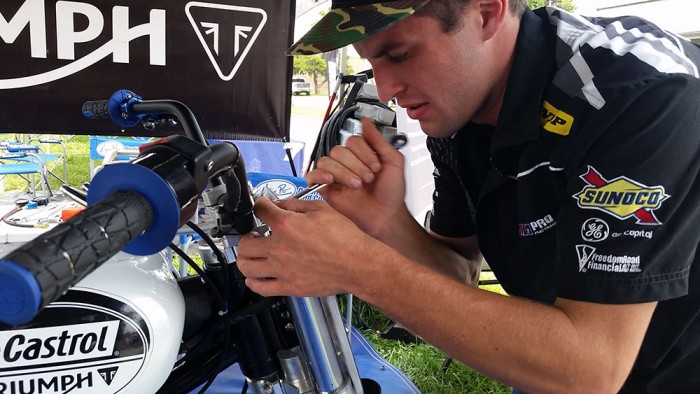 At the mandatory Riders Meeting, riders and team members were instructed by AMA race leaders on the details of the day, conditions of the track and tips on how to approach the unique shape of this track as mentioned above. 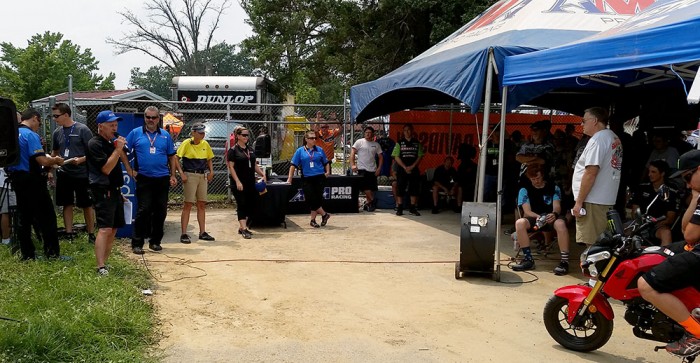 Following the riders meeting came a long wait as the DuQuoin track officials determined it needed to be watered down. 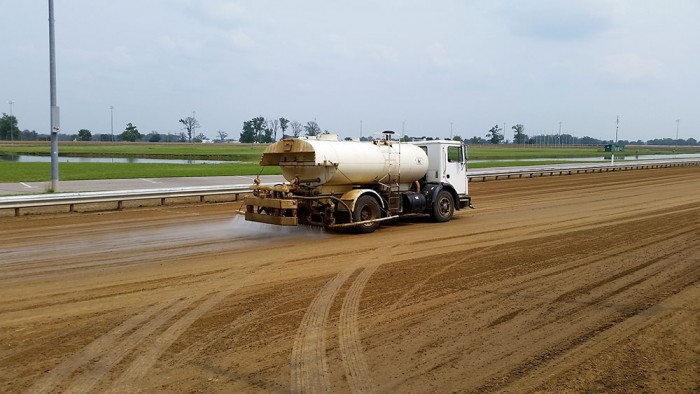 A good part of the early afternoon was spent waiting for the DuQuoin fairgrounds folks to prepare the track by adding water to keep the dust down and lay a solid foundation for appropriate traction.

Once the track was deemed ready, riders were released in packs onto the track for timed practice runs. The best lap time out of several laps for each rider are used to determine what position and heat race each rider will be placed in. 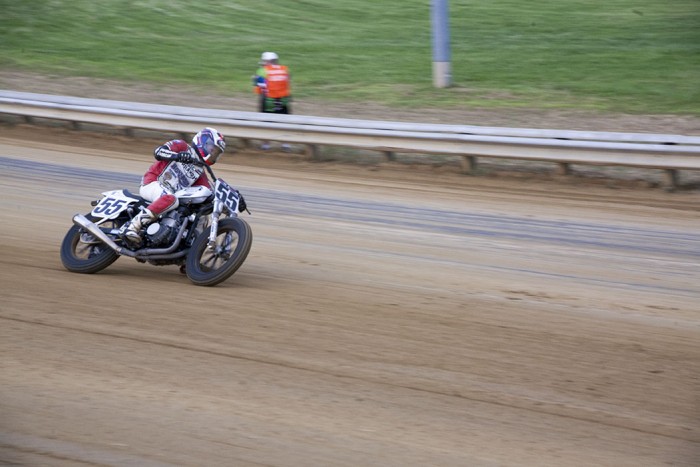 Jake Shoemaker coming out of turn 3 onto the main straightaway.

Jake Shoemaker #55 did well enough in timed practice laps to be placed in a heat race where he was in the front row, and able place 4th and transfer to the GNC1 Main Event. 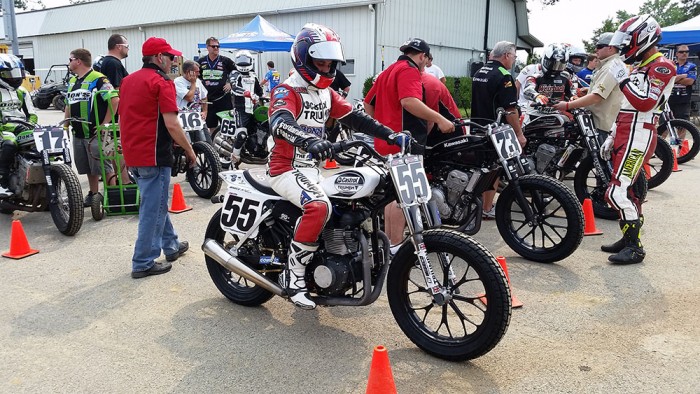 #55 Jake Shoemaker on the Bonneville Performance Triumph passing up Johnny Lewis #10 on the Ducati Scrambler.

After the heat races and during an hour intermission, fans are allowed to walk through the paddock area and meet with their favorite teams, get rider autographs and chat about the racing so far. Jake had posters that he signed and gave to those who asked for them. Many old friends came by to with him and the team well. This reporter was struck by how many fans of all types would like to see Triumph on the podium again! 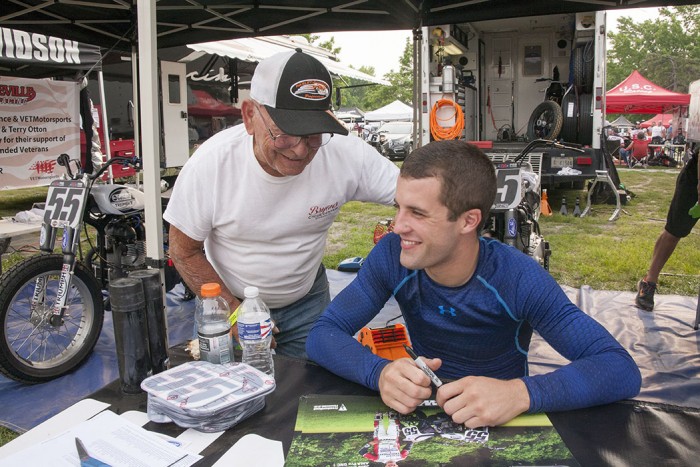 An old friend stops by to wish Jake good luck!

The Vance & Hines Harley Trophy Girls stopped by the tent for a photo op with Jake. In just a short while they would be together on the AMA Main Stage during the pre-race program. 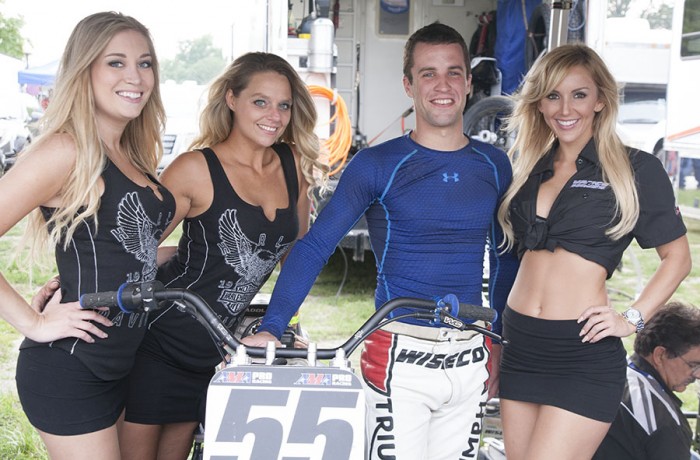 At the start of the main evening program, the Bonneville Performance / VETMotorsports team had the honor of being introduced to the spectators and online viewers. Because of it being Independence Day, the AMA and Family Events featured the veteran outreach work of VETMotorsports as a part of the program. 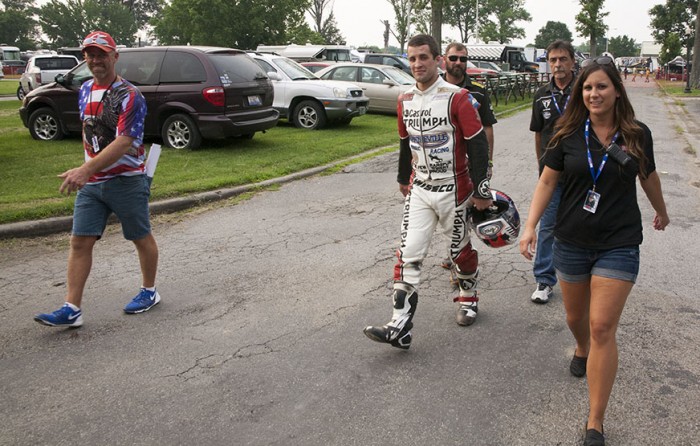 Family Events Marketing Coordinator, Leah Burdette guiding the team to the main stage for introductions to the spectators and online viewers. 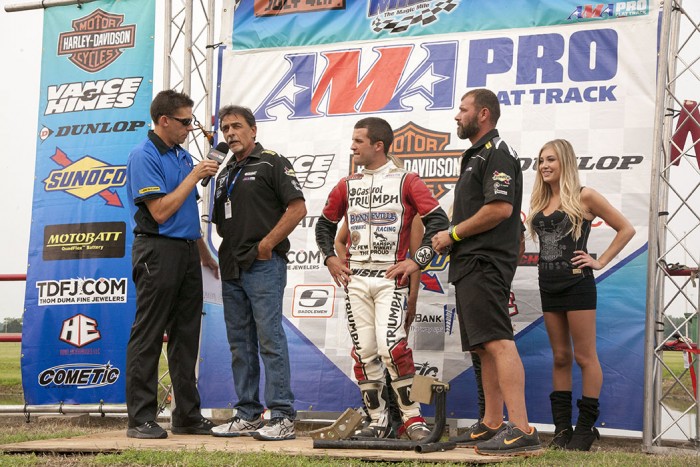 Marine veteran Bill Gately being interviewed by Scotty Dubler about the VETMotorsports program. 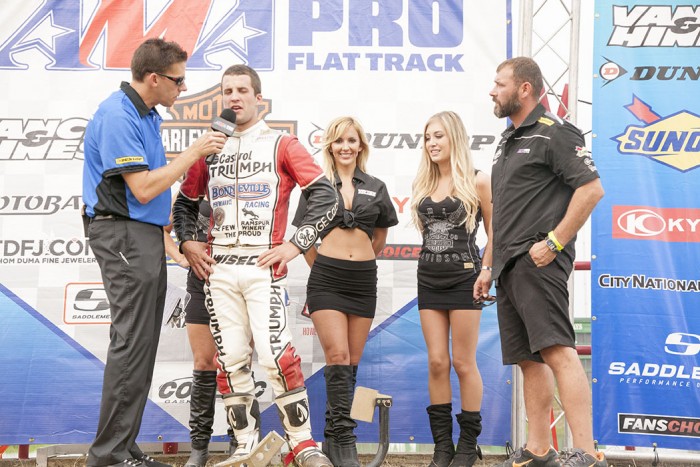 After Bill spoke, Jake Shoemaker said a few words before Scotty moved over to our veteran pit crew member. 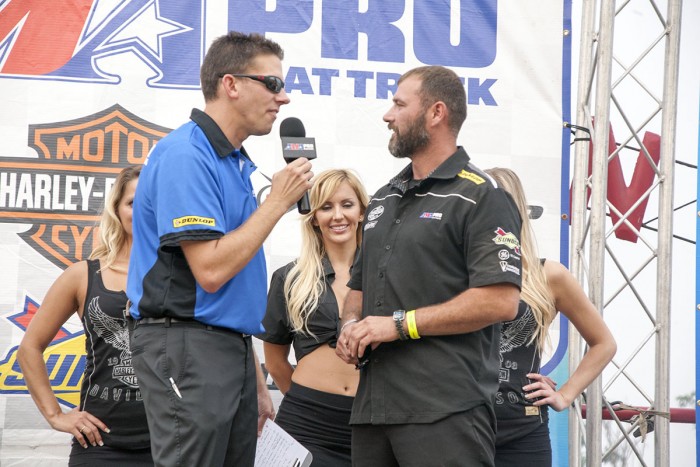 Sgt. Eddie Stowe being interviewed about his VETMotorsports experience with the Castrol-Triumph-Bonneville Performance team.

The final race of the night was the GNC1 Main Event featuring the 18 top riders from the previous timed laps and heat races. As stated above, The Castrol-Triumph-Bonneville Performance team did well enough in the heat races to transfer directly to this main event race. That gave the team more time to concentrate on getting ready. 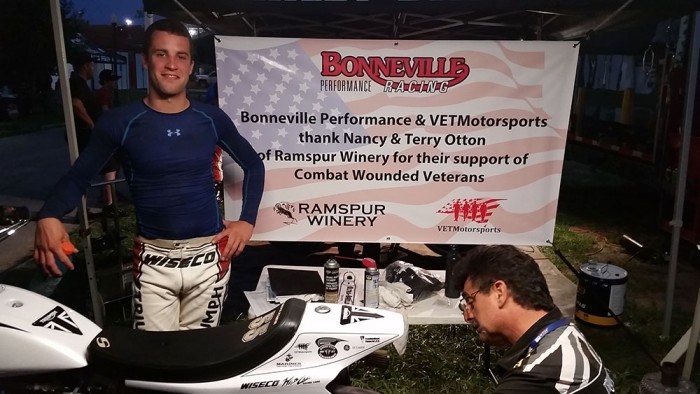 During the prep time before the main event, Crew Chief Steve Gately works on preparing the race bike while Jake Shoemaker poses next to our banner thanking our special friends Nancy & Terry Otton of Ramspur Winery for their support.

Each team that makes it to the Main Event is introduced by the announcer, in the order they will be positioned. Usually Scotty Dubler, the AMA announcer introduces the name of the team and owner first (Castrol-Triumph-Bonneville Performance owner Bill Gately), and the rider, number and where they are from announced last (#55 Jake Shoemaker, PA). 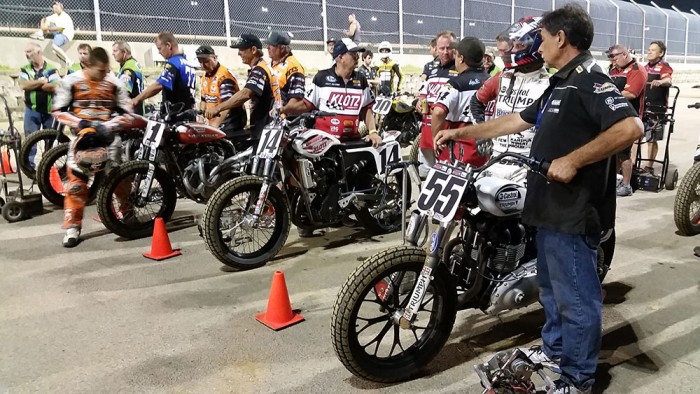 Jake Shoemaker #55 and team owner Bill Gately in the staging area for the main event.

Jake early in the race, in there with a pack, fighting for a better position. 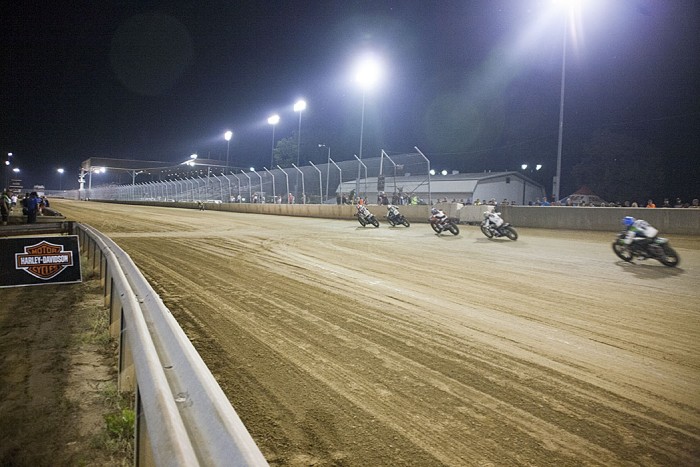 A rider went down and caused a red flag. This brought the race to a full stop.The team used the time to strategize, cool off, clean helmet visors and prepare for the restart. 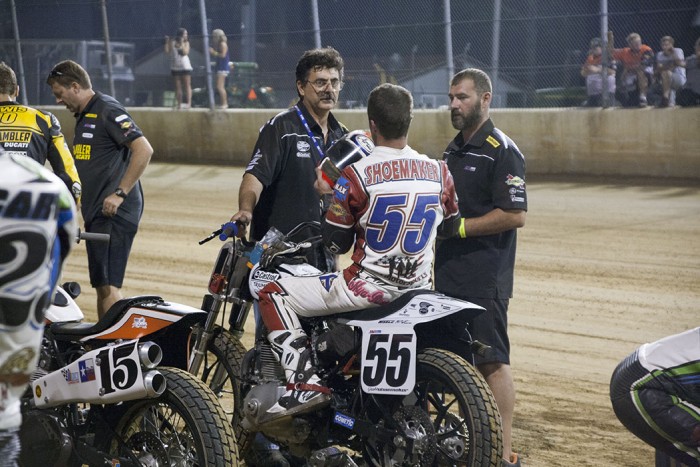 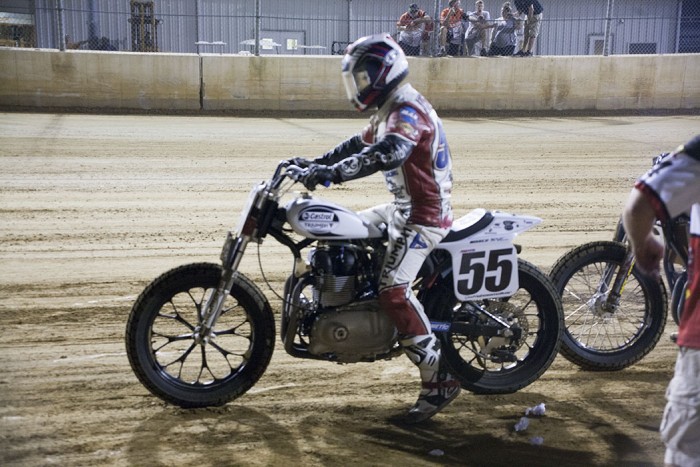 Jake getting ready for the restart after the red flag full stop.

There were some great racing moments while it lasted.

The GNC1 Main Event race ended for Jake and the team prematurely. Something in the engine caused it to seize up, as if someone had locked the brakes. Jsker was able to do a controlled skid to a stop and get the bike and himself off the track safely. This unfortunate event was a disappointment to all of us as Jake had been as high as 5th position at one point in the race. Overall this was still a very good day of racing for the team and an opportunity to learn and grow in the process of seeking a podium finish this season. 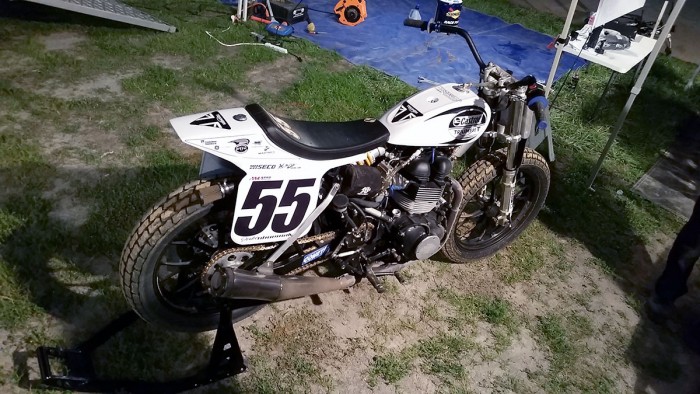 The Bonneville Performance Supertracker cooling off after the race.