Arrival at the Springfield Mile 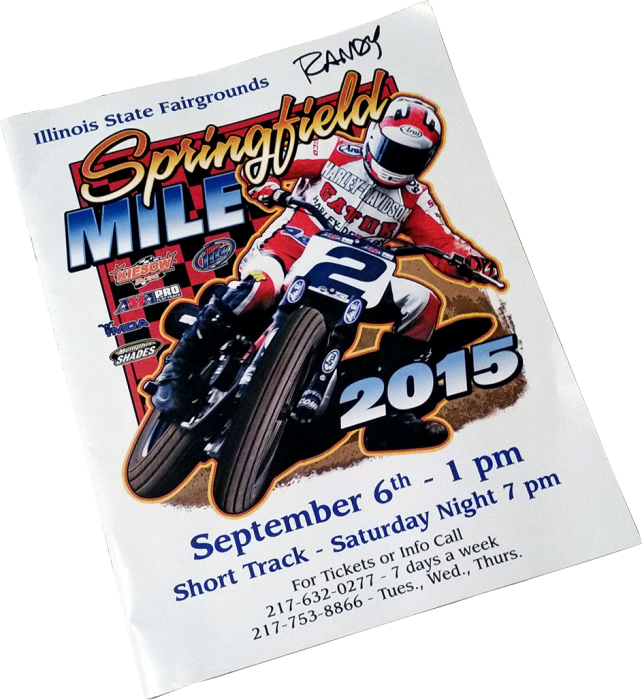 The Castrol-Triumph-Bonneville Performance Team and the VETMotorsports crew arrived early to the track to set up the pit area and get the bikes through tech inspection. This reporter arrived a little later after riding my 2012 Thruxton from Chicago to Springfield, Illinois. After entering Gate 6, I headed to the Main Ticket office in the Grandstand to pick up my media credentials. A nice lady found my name on a media pass list and attached a wristband on which was printed “Hot – Hot – Hot”! Turns out it was a prophesy about the nature of the weather and the racing for the rest of the day!

With this “hot – hot – hot” wristband I was able to enter the Paddock, and join the Bonneville Performance Triumph factory sponsored AMA Pro Flat Track Racing team in their pit area. My personal thanks go to Dave Kiesow of the the Springfield Mile, and to Andrew Swain and Gene Crouch of the AMA Pro Racing Marketing and Communications team, for the opportunity to attend and report on this great event! 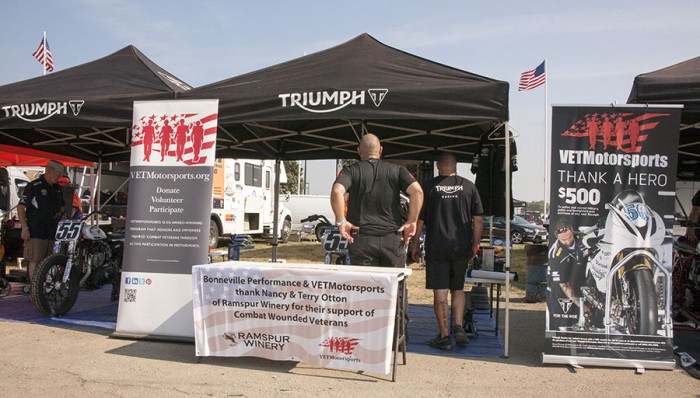 The team pit area for the day. Bonneville Performance and VETMotorsports are a grateful bunch. They go out of their way to thank their sponsors for making what they do possible! 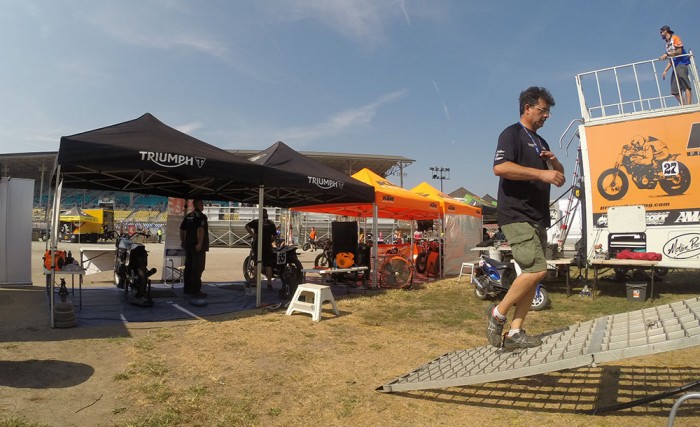 Crew Chief, Steve Gately running up the ramp to the team truck which also serves as the shop during a race. 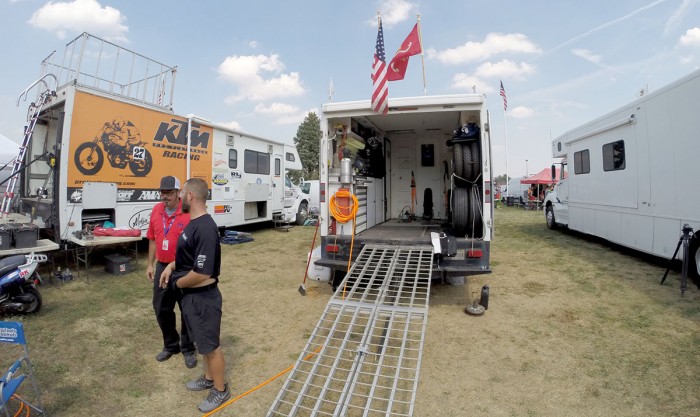 The team truck and “shop” 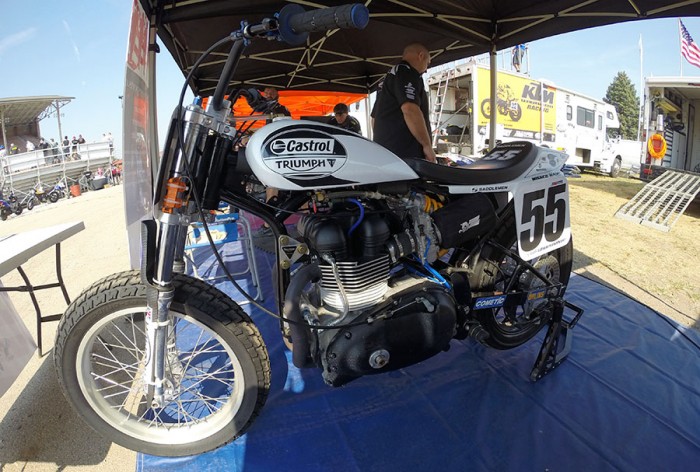 One of the two Bonneville Performance designed and built Supertrackers, with the timing sensor mounted in place on the left front fork, signifying that it has passed AMA tech inspection.

This reporter greeted team owner Bill Gately, his brother Steve Gately, Crew Chief, and Malcolm, a friend of the Gately’s who had travelled all the way from Maryland. Also present were several key members of VETMotorsports: Eric Whitnable, Board Member, plus Eddie and Matt, both wounded war fighters who were helping out on the pit crew for the day. I was impressed with how Triumph and the other team sponsors upped their support of this worthy non-profit for 2015. Bonneville Performance is very pleased to be a part of the program.

Team rider Jake Shoemaker #55 and his buddy Kevin had driven in all the way from Pennsylvania. 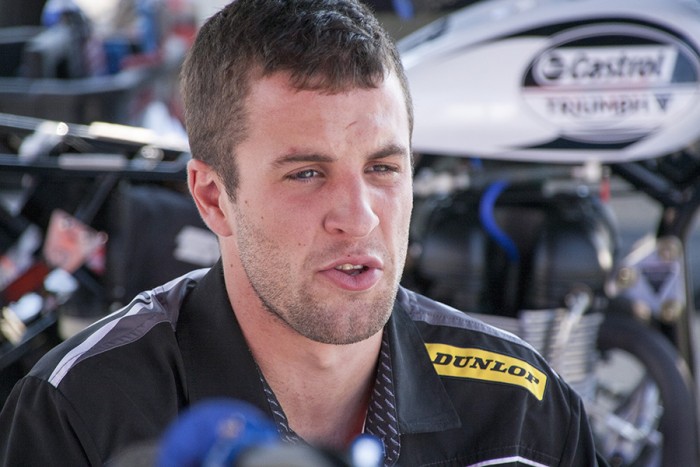 As I began shooting photos, Jake was being interviewed on camera by Will Fulford, a cameraman from Nashville, Tennessee who specializes in covering motorsport events. Will and photographer Yve Assad covered the day on behalf of Triumph Motorcycles. 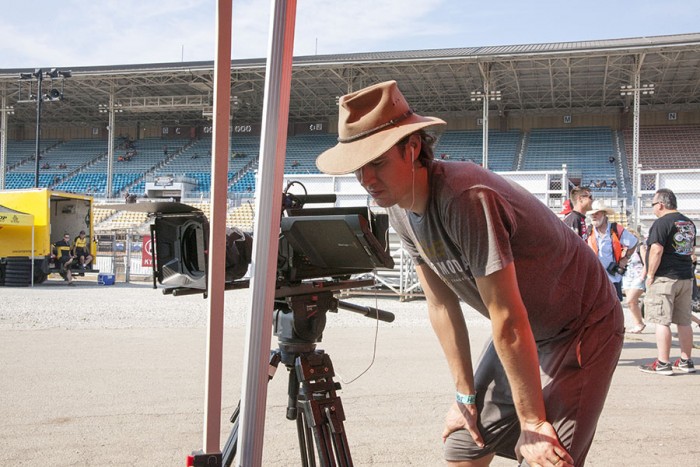 Cameraman, Will Fulford from Nashville, Tennessee.

Having greeted everyone, this reporter got his camera and electronic gear all set, and began taking photos and posting to the Bonneville Performance Facebook Page. 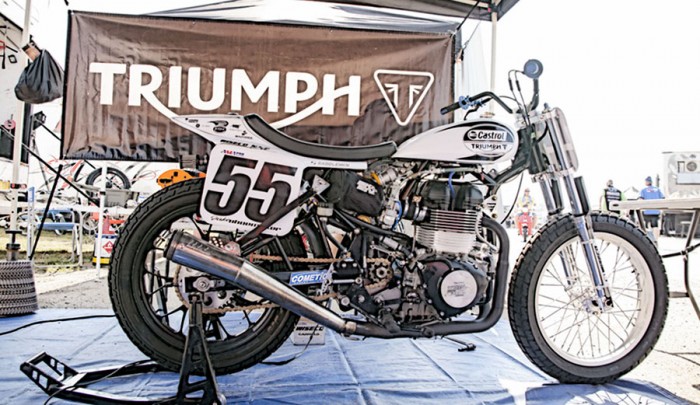 This pretty much says it all…

After the mandatory riders meeting at 9:45 am, the Bonneville Performance team prepared the bikes (A main bike and a backup bike) for the first practice session at 10:15 am. Jake put his racing leathers on and the bikes were started and warmed up in the pit area. Listen to this…

I LOVE that sound…! Wish my Thruxton sounded like that!

Staging for the first practice session

Around 11 AM was the team’s first turn on the track so they headed over the the track staging area with their practice group, to be ushered onto the track by the AMA racing officials. Jake posted a pretty decent lap within that first unofficial session, and most importantly he learned about the condition of the track to inform the team on some suspension setup changes.

We had a little drama when staging for one of the practice sessions. Steve Gately discovered a patch of oil under our Supertracker and immediately went into high gear trying to assess where it had come from. He quickly confirmed that it was not from our bike, which meant that it may have been dropped there by the previous bike in that same position. If that were the case, the leaking bike would be on the track at that moment! This being a potentially serious safety hazard, the team notified the AMA race officials immediately. 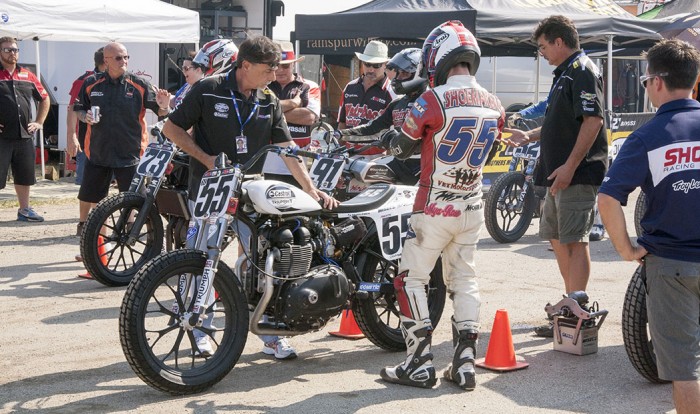 Some drama around an oil patch we found on the ground.

Thankfully it turned out that the previous bike was also not leaking oil, so the patch was officially covered up with loose dirt so it would not cause another problem! 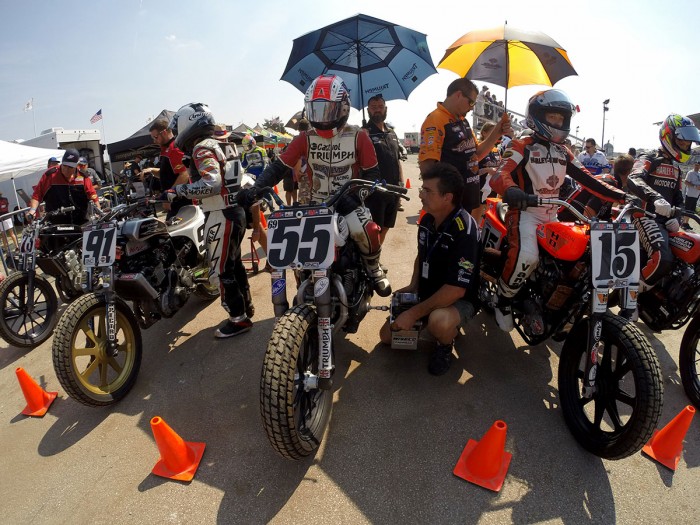 As the sun kept rising in the sky, so did the temperature. We had to bring out the umbrella during staging to keep Jake and the bikes cool! That’s Nichole Mees #15 lined up next to Jake.

In the following 2 official practice sessions, Jake posted some improved lap times which got him placed in Heat Race #2.

Jake Shoemaker #55 leading a pack in a timed practice session. 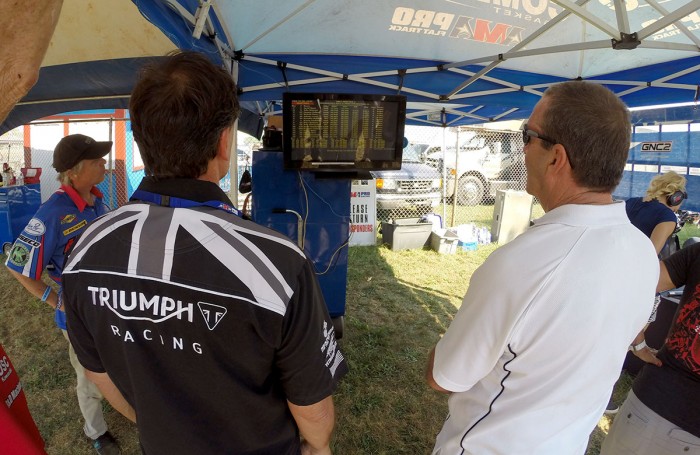 A common sight after every race is a group of people huddled under the AMA tent looking at the official lap times and getting printouts to take back to their pit area. 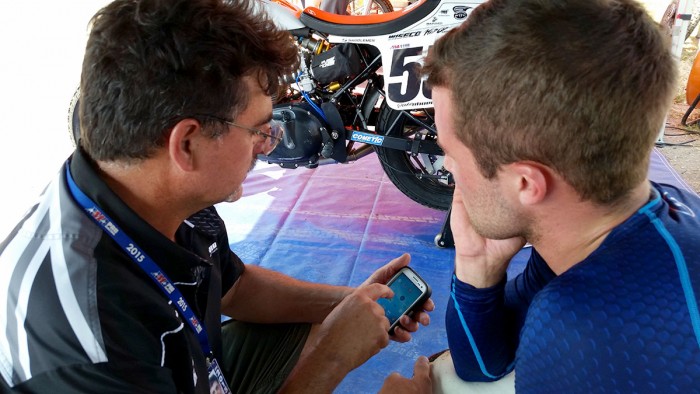 There are 2 Triumph factory-sponsored AMA Pro Flat Track teams. The Bonneville Performance team neighbors at all AMA Pro Flat Track events are the Latus Racing Team with rider #44, Brandon Robinson. Brandon had a very good day at the Springfield Mile finishing 3rd in his heat race, and 6th in the GNC1 Main Event race. 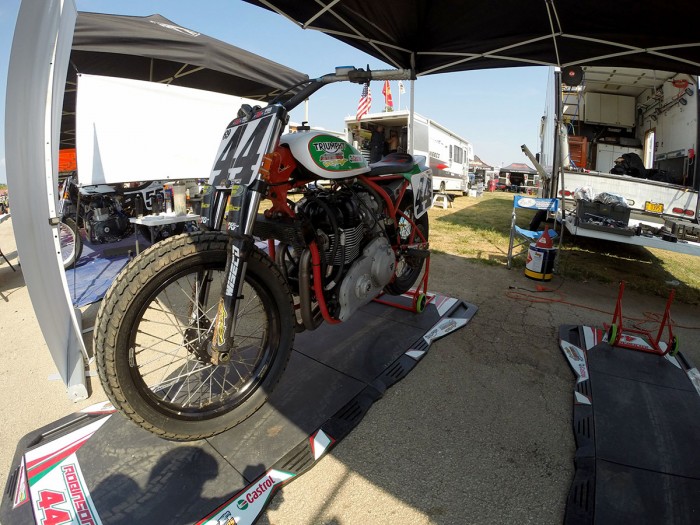 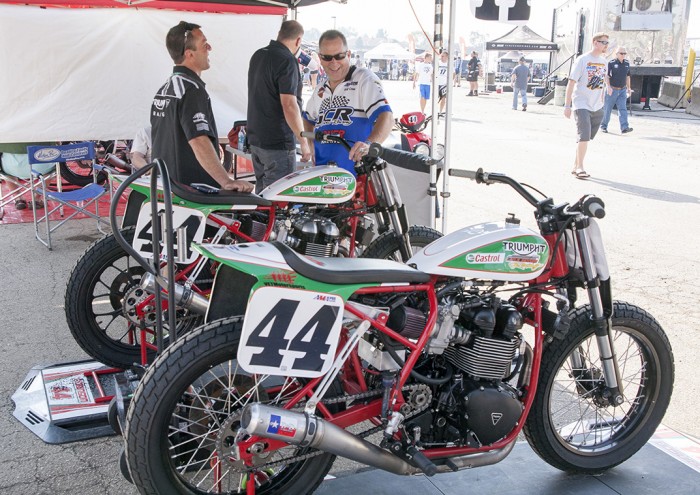 In the pit area next to Bonneville Performance was Latus Team Manager, Joe Kopp and the two #44 Latus Bonneville Trackers.

After the completion of the timed practice sessions there was an open paddock. This is a time where there is no racing giving fans and teams time to grab some lunch and for fans to get autographs and support their favorite teams and riders. 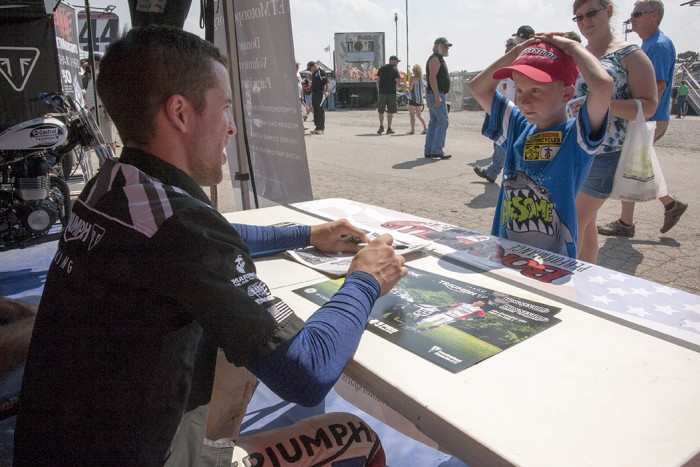 Jake engaging with a young fan. 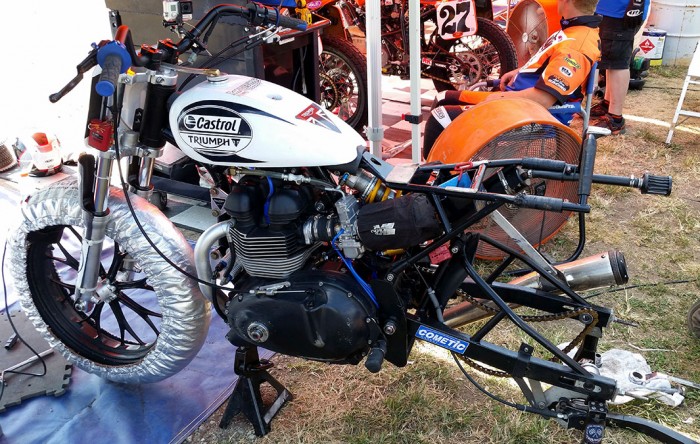 The bikes get attention during Open Paddock too! 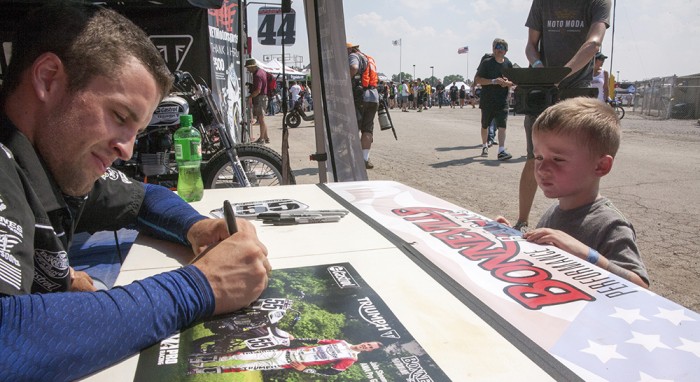 This little fan reminded this reporter of his grandson and his desire to bring him to his first AMA Pro Flat Track Race! 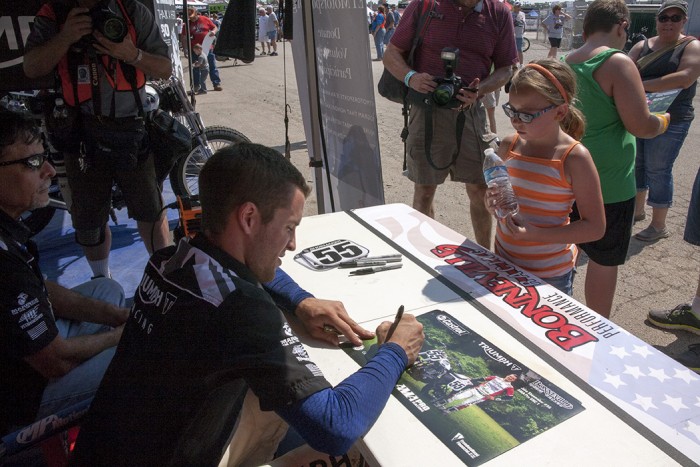 With women like Nichole Mees and Shayna Texter doing well in this sport, it is encouraging to see their influence on the fan base! 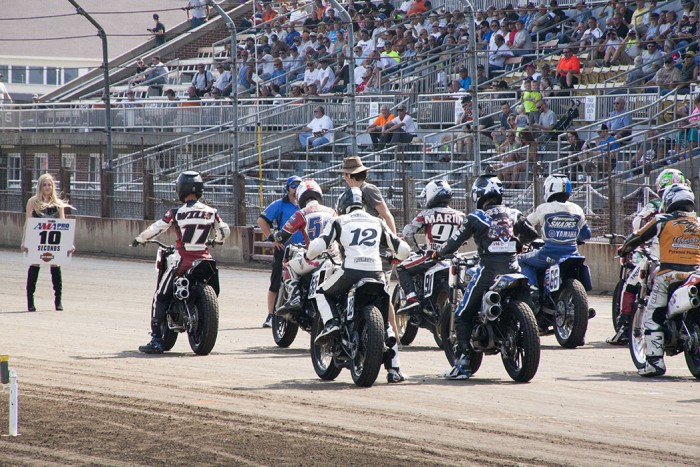 Jake Shoemaker #55 lined up in the front row 2nd from left, with Mikey Martin #91 to his right. 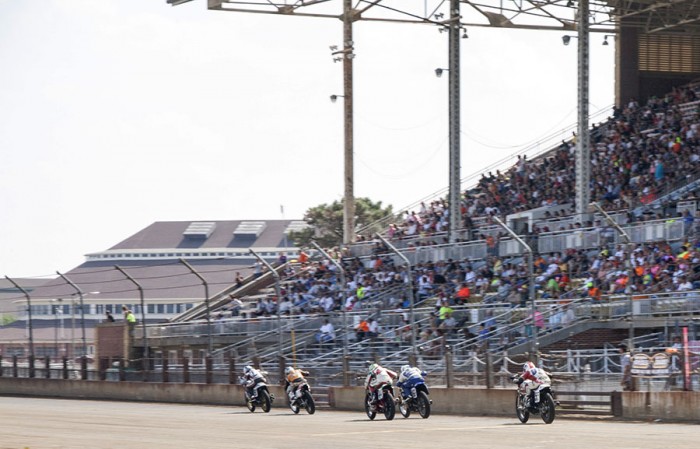 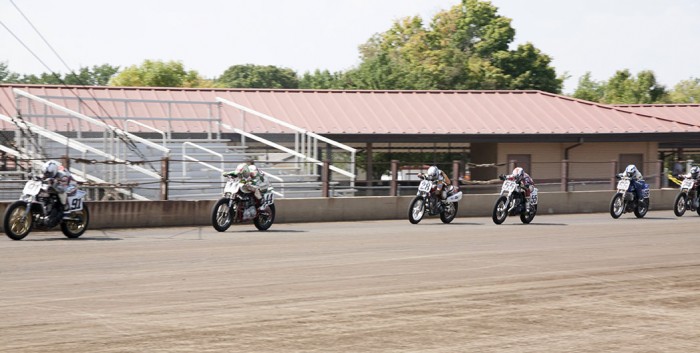 It was a great day to see both Triumph teams doing well – finishing 3rd and 4th in their heat race! Jake posted the fastest lap time.

By passing #66 and placing 4th in his heat race meant that Jake and the Bonneville Performance team would automatically transfer to the GNC1 Main Event Race scheduled for 4 PM. This gave everyone on the team a chance to plan and prepare for the final race in a less stressful and hurried environment. 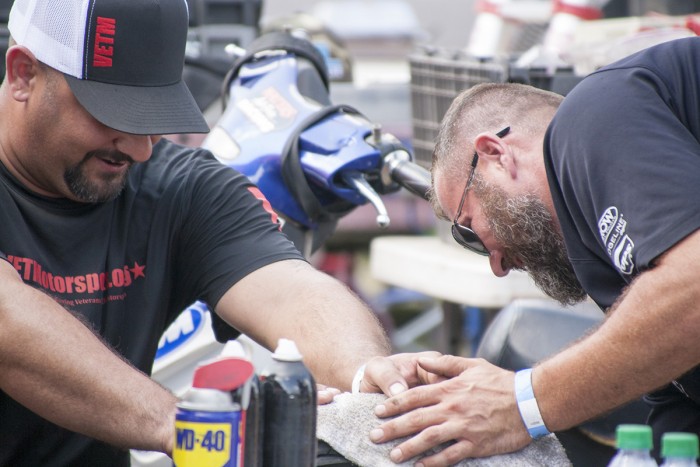 Wounded warfighters, Matt and Eddie helping to prep the bikes for the GNC1 Main Event Race.

During the time between our Heat Race #2 and the GNC1 Main Event the team used to time to prepare. 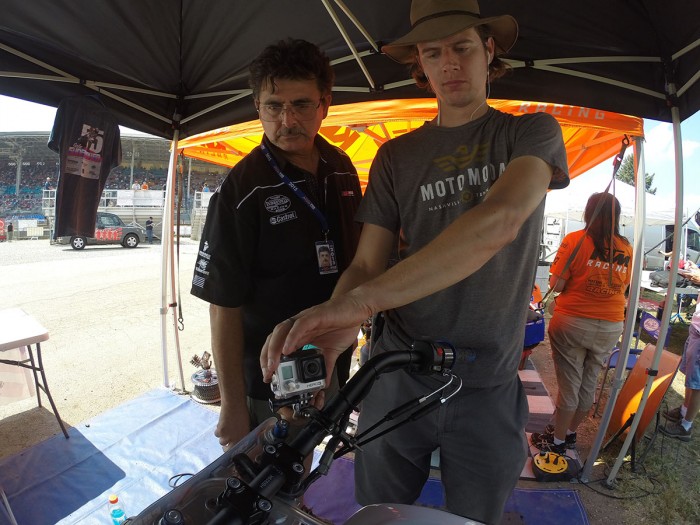 Crew Chief Steve Gately and cameraman Will Fulford collaborate on the placement of a GoPro camera on the Supertracker for the final race.

As always, riders and teams line up in the staging area before each race. For the featured Main Event races, the teams and riders are also introduced to the grandstand crowd by the AMA event emcee’s as they enter the track. 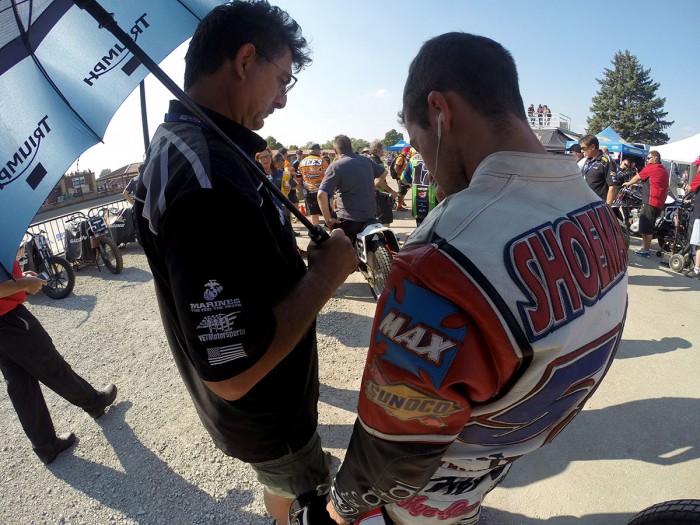 Steve and Jake gathering thoughts and focus before the GNC1 Main Event race in the staging area.

The late afternoon sun was beating down on the teams as the track was prepared for the Main Event. 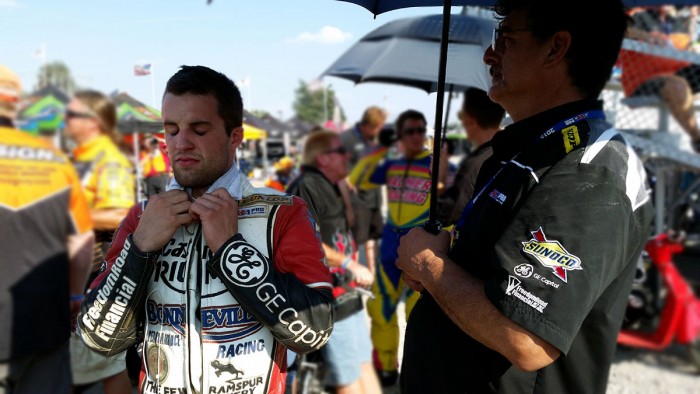 Jake and the team finding ways to keep cool and stay focused.

The track ready, the teams were announced, lined up on the starting grid and the race began. 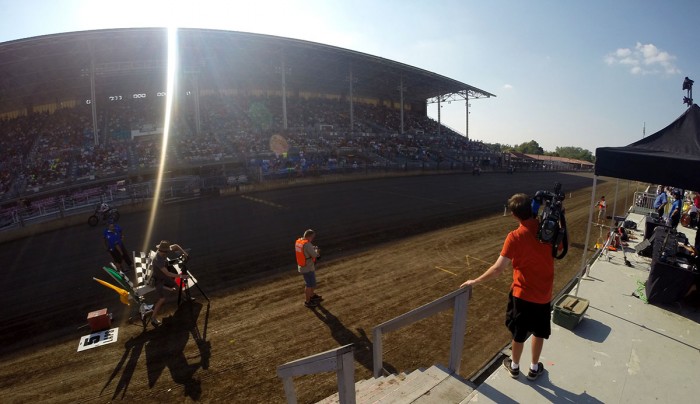 As the racing began, Jake was running in 8th position.

Here’s a short movie clip giving you an idea of the speed and volume this race produces, which makes it all the more exciting!

Jake succeeded in gaining one position and was running very well in 7th position until the 24th lap (of 25 laps) when he experienced loss of traction with the tires and a degraded response from the engine. He was forced to signal that he needed to exit the track, and did not finish (DNF) the race as a result. This was a big disappointment to the entire team after experiencing such a promising day. 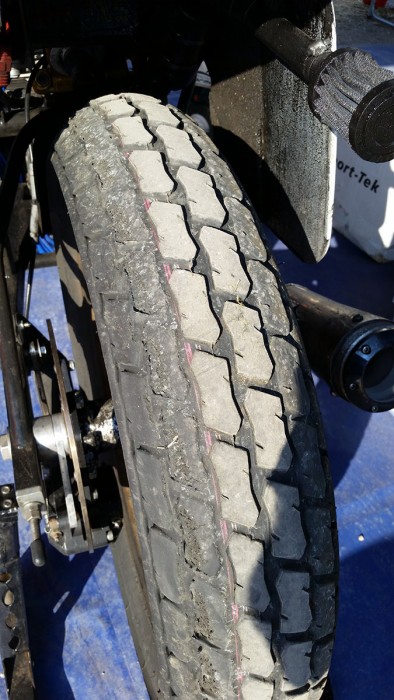 Rear tire after 24 laps of the GNC1 Main Event race. 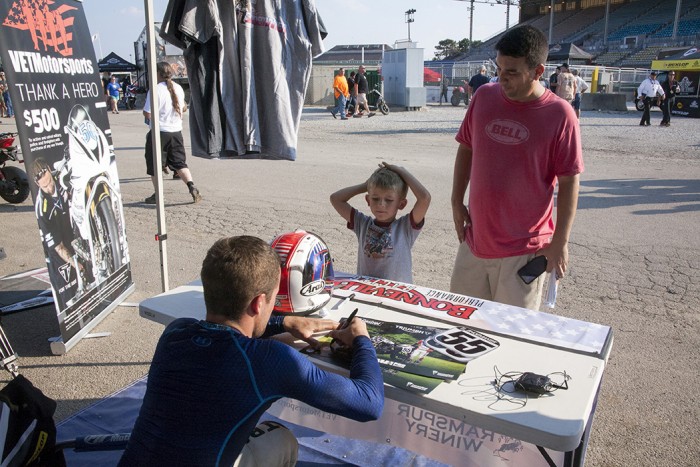 Fans of all ages still come by after a disappointing loss to encourage and support the team!

Team sponsors, Castrol and Triumph are participating in the Performance Match Fund for VETMotorsports this year. So far, they have contributed over $8,000 to the fund which supports non-clinical efforts towards injured warfighter recovery. Bonneville Performance is honored to be able to support this worthy cause. 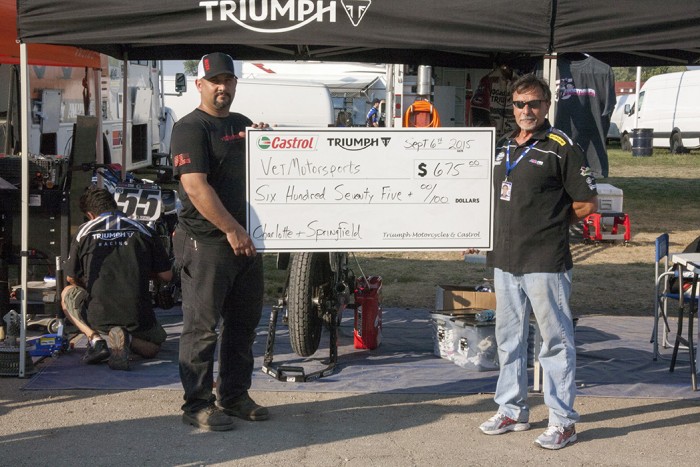 Even though there was a disappointing final outcome, the Bonneville Performance team had a lot of things go very well at the Springfield Mile 2. The BP Supertracker bikes performed really well all day without any failures until the 24th lap of the final 25 lap race. Jake’s lap times prove that the bikes are capable of delivering competitive performance to even the very best competition as reflected in Jake’s Facebook Page post:

Staying cool, and focused. Worked my butt off to get to the lead draft. Made it there with a few to go and suffered from a motor failure with one to go. Gutted with how the seasons going, we got what it takes to be up front and that makes it even worse with these dnf’s. Onto Delaware speedway in two weeks to turn our luck around.

There are a myriad of details that all have to work in tandem to win a race or end up on the podium. This was a race day where most of those details fell into place, and that gives encouragement to the team for the races ahead!