Due to a massive weather system moving through the Midwest on Saturday, June 27, 2015, the Lima Half Mile was officially postponed one day by the AMA and run on Sunday, June 28, 2015.

Our team arrived Sunday morning at the Allen County Fairgrounds in Lima, OH to start the process of setting up our pit area in the paddock. By mid-morning the bikes had passed tech inspection by the AMA officials and we were making final adjustments in prep for timed practice laps. 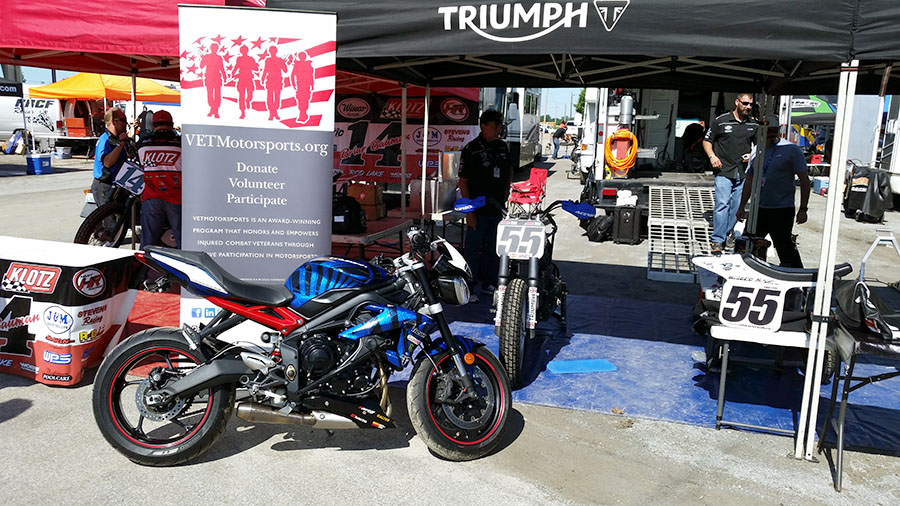 The Castrol-Triumph-Bonneville Performance team was honored to have Eddie, Pete and Eric from VETMotorsports join us on our pit crew for the day, participating through the VETMotorsports outreach program. 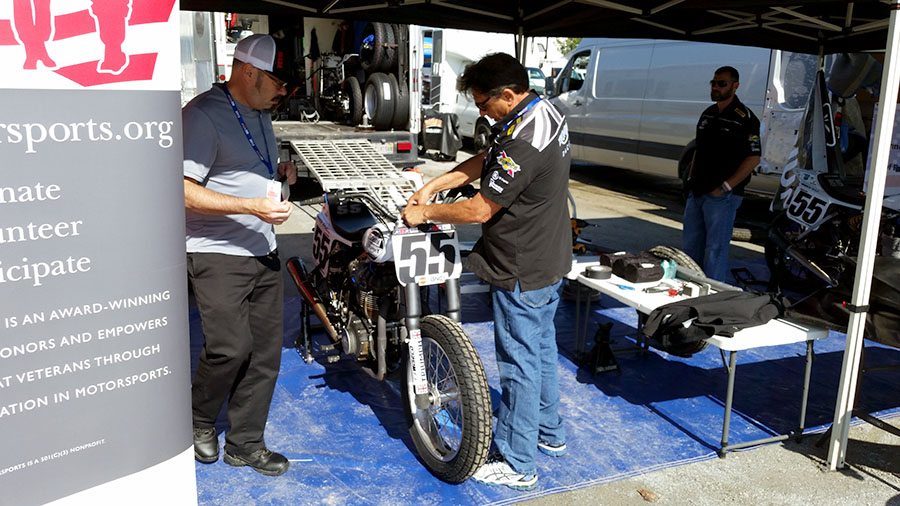 Eric, Bill and Eddie working to prep the bikes for the Lima Half Mile.

Also in our pit area was displayed a large banner thanking Nancy & Terry Otton of Ramspur Winery for their support of the team and wounded combat veterans outreach programs. 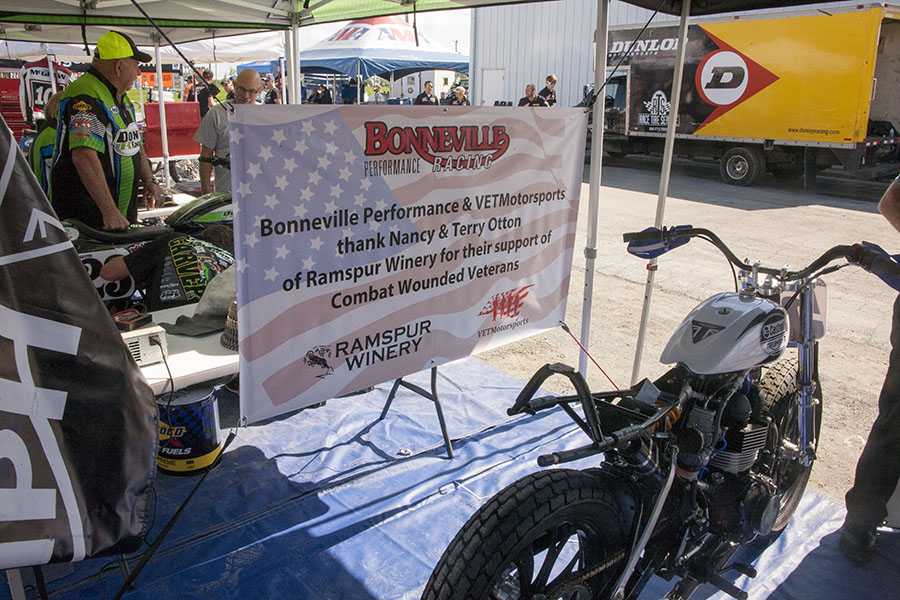 Thanks for your support, Nancy & Terry Otton!

Also on display in our pit area was Jake’s Triumph Street Triple 675, provided by Triumph Motorcycles. 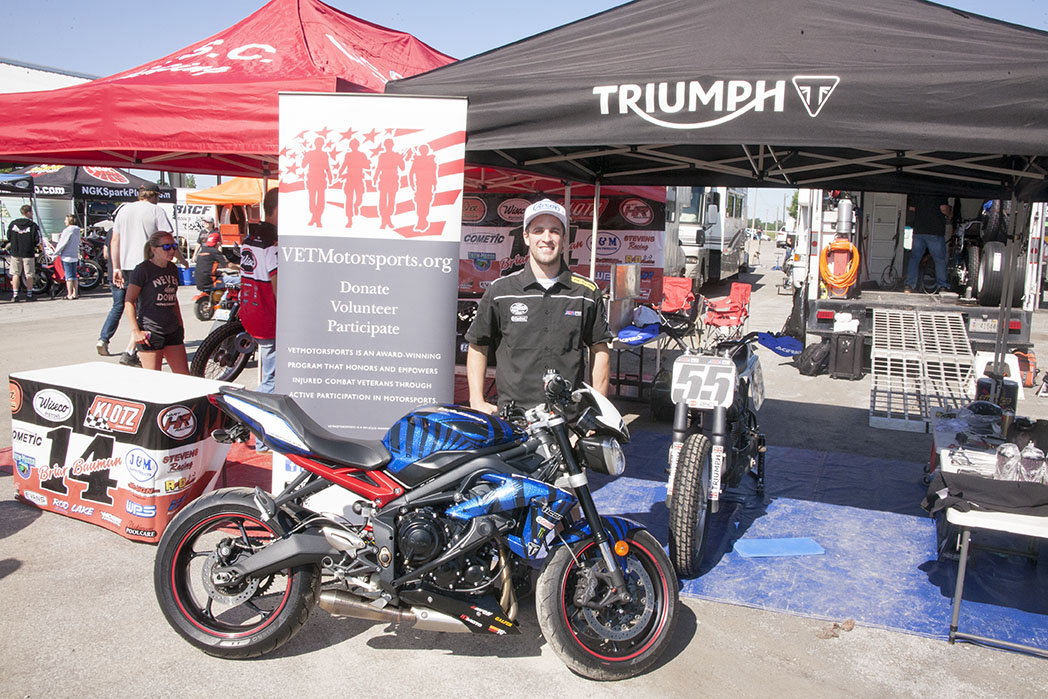 We received lots of stares and conversations throughout the day about this sweet Triumph Street Triple 675!

The track at Lima is unique in its composition. It consists of fine pea gravel that is not tightly packed down like many other dirt flat tracks, giving it a softer feel that creates a lot of dust and flying dirt. This creates a lot of potential mechanical and cosmetic problems for the race bikes. In light of this, most teams will cover as much of the bike surface with protective films and tape, as well as add extra screens and filters for the air intake and exhausts. 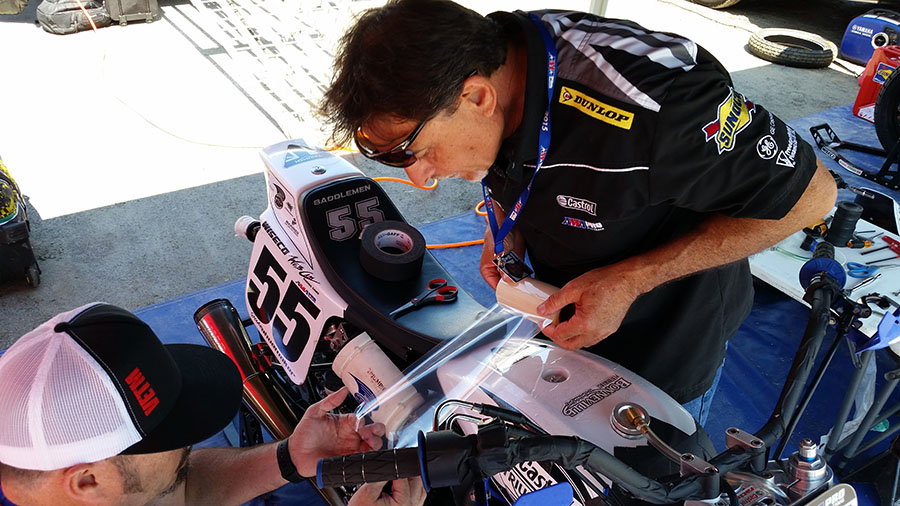 After all the prepping of the Bonneville Performance Supertrackers was completed by the pit crew under the direction of crew chief Steve Gately, we fired one up! There is nothing like the sound of a tuned 995cc Triumph twin racing engine! Hearing this engine run so well gave us confidence that we were ready for the first timed practice laps. 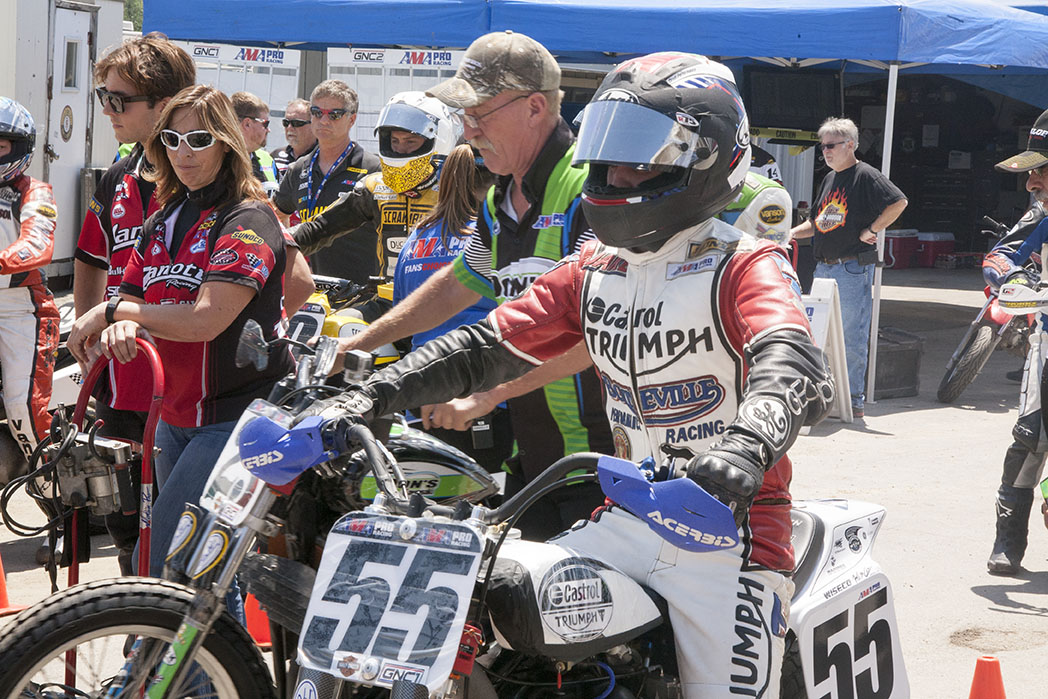 Based upon the best practice lap times, heat races are setup to determine who will be in the final GNC1 Main Event. The top 4 riders in each heat race transfer directly to the main event. The others compete in additional heat races until 18 total riders are selected for the final race.

We were fortunate to place 4th in our GNC1 Heat Race 3, so Jake transferred to the GNC1 Main Event scheduled for the evening. This provided a longer time period to prepare the bike and rider for the final race that counts for points in the national title standings. 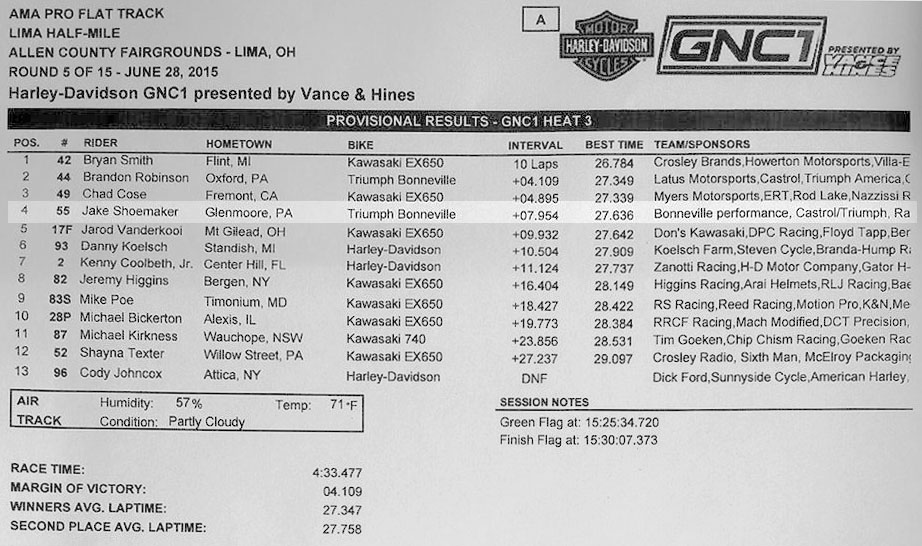 GNC1 Heat 3 Race Results – We’re in 4th so we transfer to the Main Event.

This next photo gives you a bit of an idea of just how dusty this track is, and the problems it can create for engines and riders.

Like most young rider these days, Jake updates his social media channels throughout the day. It’s all part of connecting with fans, and promoting sponsors in this professional sport. 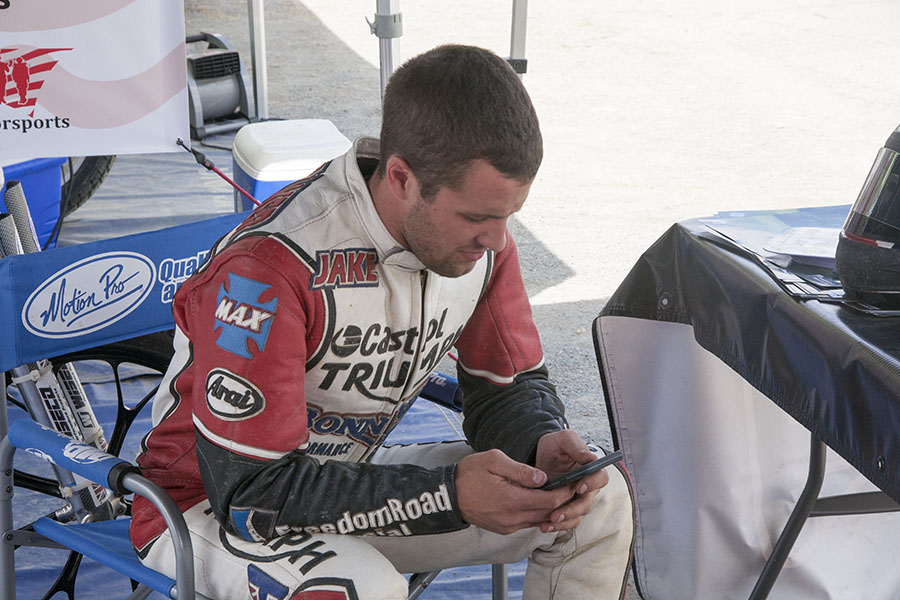 Between races this reporter also learned about the sticker on the side of the team’s starter motor in memory of Dave & Tyler Brintlinger. This father and son were tragically killed in an accident on their way home from an AMA Pro Flat Track event in 2012. 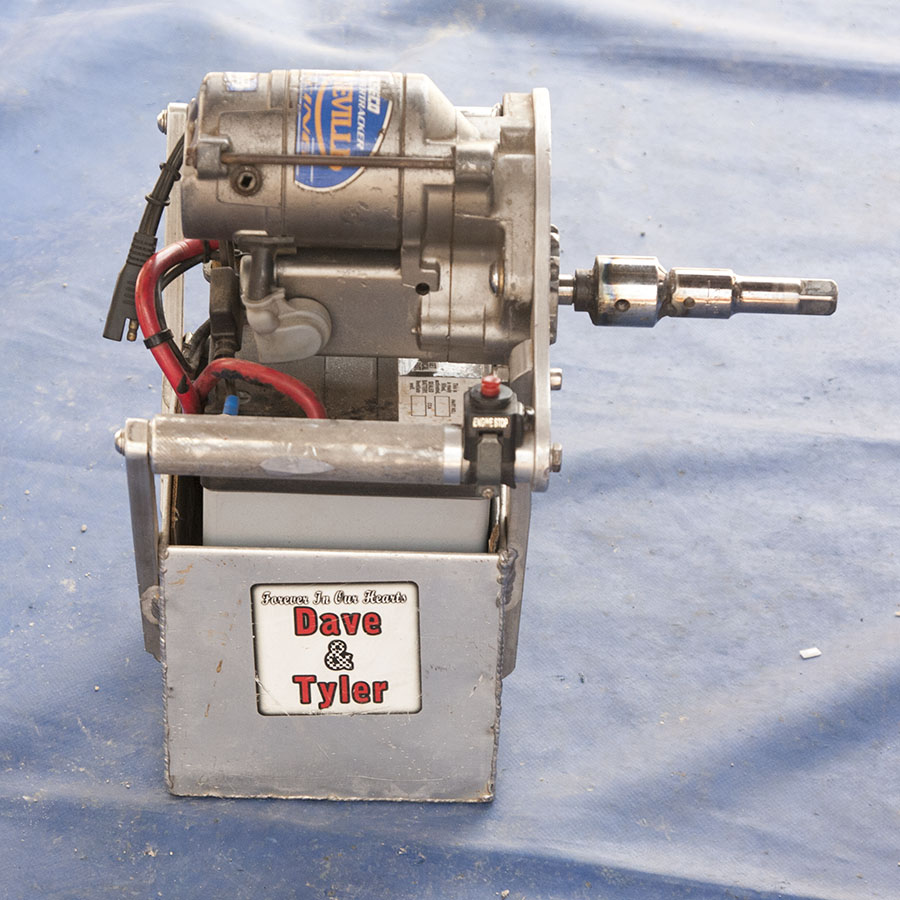 The Bonneville Performance starter motor with the memorial sticker for Dave & Tyler Brintlinger.

Another thing you often see on riders suits is a patch to “Mom and Dad” recognising the key role that parents play in supporting their children in this sport. 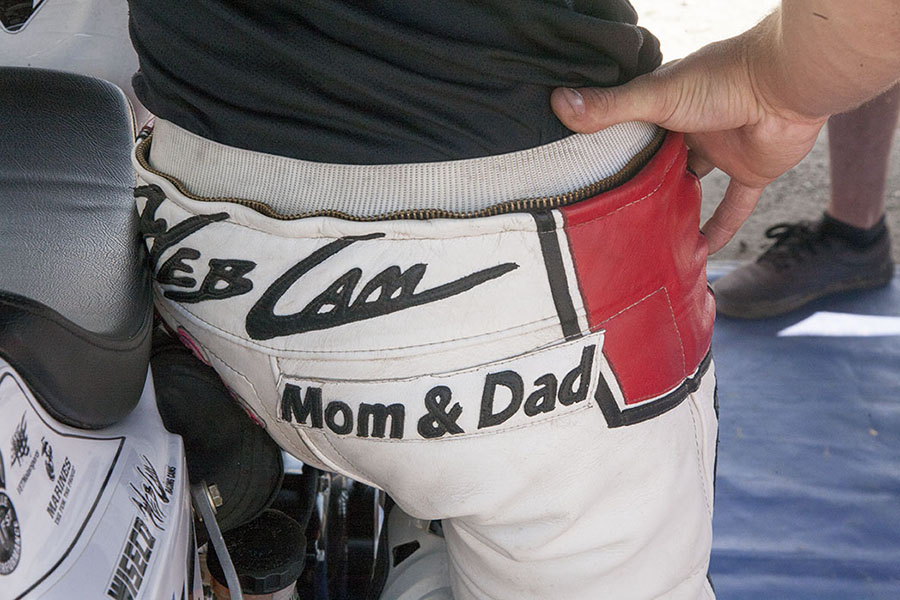 Between races you also often see teams changing the gear ratios on the race bikes due to the track conditions. Here Steve is changing the rear sprocket on one of the bikes. 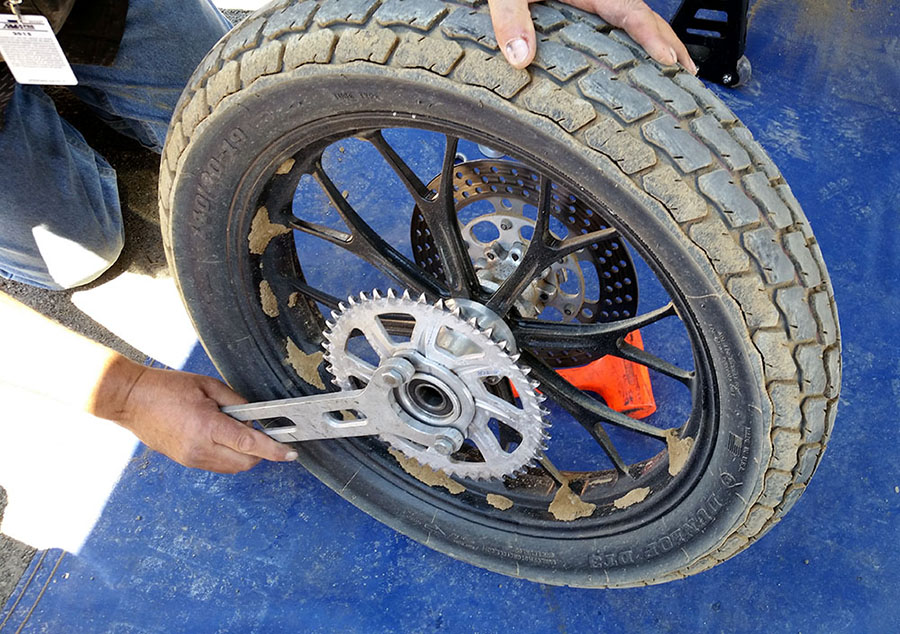 Changing the rear sprocket on the Bonneville Performance Supertracker.

6 laps into this final race Jake crashed in turn 1 and was in danger of being hit by passing bikes. Thankfully, the other riders were able to steer clear, and Jake dragged himself to safety at the edge of the track. This ended our hopes for a finish or a podium win for the day, but we were glad that Jake suffered only minor injuries, and the bike was repairable.

Jake got a good start from the outside of the 2nd row.

Jake Shoemaker #55 battling things out in the dusty dirt of the Lima Half Mile.

The bike will need work, but Jake is OK!

Just one of the items that will need to be replaced or fixed! 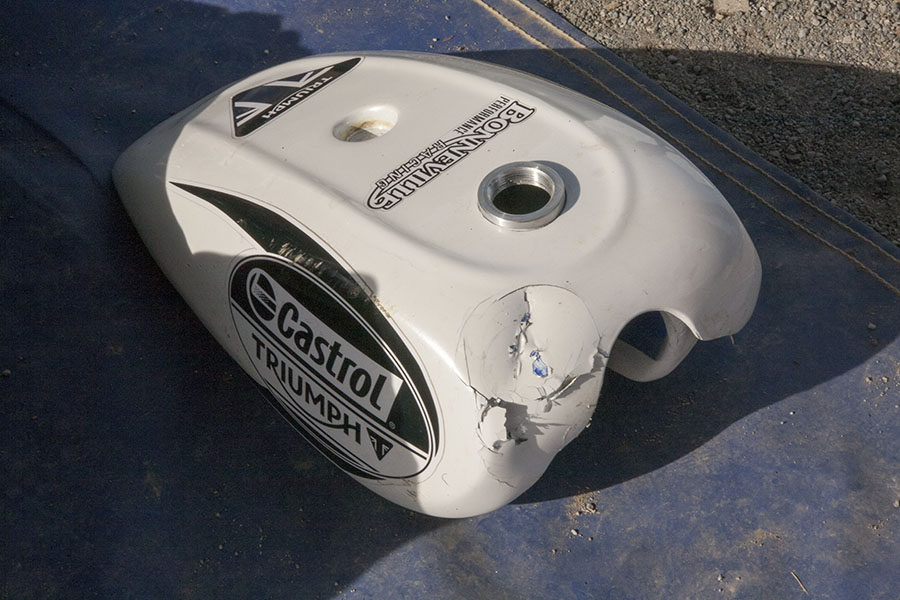 The fiberglass Supertracker gas tank will need to be replaced.

At the conclusion of every flat track event is the need to pack up everything and move on to the next event. In our case this means loading all the equipment and three race bikes into the back of our Bonneville Performance team truck. After you help to do this a few times you realize how everything has a special place or it wouldn’t all get packed! 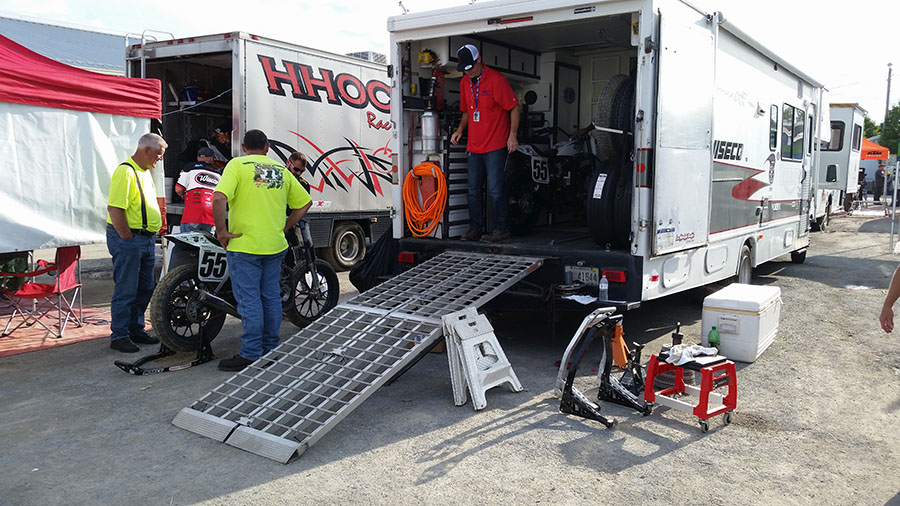 Packing up the pit area into the Bonneville Performance team truck.

In this case we headed to a friendly motorcycle dealership in the Midwest that would allow us to work on the damaged bike and get it ready for the following weekend DuQuoin Mile race in southern Illinois.